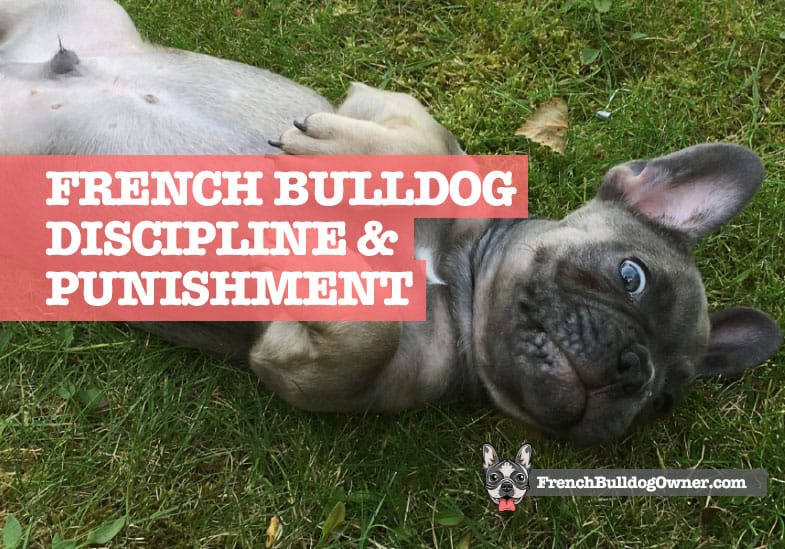 Dogs learn from their owners, and none more so than Frenchies. Our dog Claude is a great example and he really does mirror me in so many ways. And that’s all due to how he has been raised and trained – but it was very hard work that I had to put in during his puppy months.

With good training and discipline, you can sculpt the personality of your French Bulldog. But the key here is to not confuse discipline with physical punishment or loud yelling.

Dogs don’t understand it when you punish them with aggression. Dogs get scared when you shout. It’s more than likely that they will mirror that behavior back with barking – and a dog that isn’t treated well, can develop bad behavior like biting.

But this doesn’t mean you aren’t able to punish your French Bulldog puppy. You can punish a Frenchie, but it’s by using discipline, and not hurting them.

And that’s what this guide is about; I am going to show you how to discipline a French Bulldog so you get them to behave like a well-adjusted dog without resorting to physical punishment which should never do, even as a last resort.

How do you discipline a French Bulldog puppy without punishment?

This breed is notoriously stubborn, and I’ve covered this aspect to their character in my guide to raising a healthy and happy Frenchie. So many new dog owners will struggle with their French Bulldog, but if you persevere, stay consistent, and use corrective discipline you can soon iron out any unwanted behavior.

Before I get into the tips you can use to discipline your French Bulldog without using physical punishment, here are the rules of engagement:

The following tactics are all ones that I used with our Frenchie and have never had to resort to any physical methods of punishment.

1. Stay consistent with the discipline and training

Dogs can easily get confused, and Frenchies aren’t always the sharpest mentally, so keep things consistent and simple.

For example, if on Monday you clap to get their attention, so they jump up at you, but then two days later scold them for jumping up at a stranger, they aren’t going to get it.

This was probably the biggest training mistake I ever made with Claude – when he was around 10 weeks old, I would play fight with him in our garden, encouraging him to nip at my hands. It was a fun game and didn’t hurt as he was so young. I should never have started this game though…

By the time he was 4 months old, those teeth were sharper, and he still wanted to play the nipping game. I had re-train him to stop biting, which probably confused him at the time.

With any French Bulldog discipline, you need to be consistent. By doing so you will get quick results, and the result you want.

2. Discipline them at the time of the offence

If you leave your Frenchie home alone only to come back to a scene of destruction, they aren’t going to put two and two together when you start getting angry and shouting at them.

For example, if you walk in the room to see your prized cushions chewed and torn to pieces and then start shouting at your Frenchie, he’s going to wonder what you’re getting so mad about.

Whilst French Bulldog’s do have good memories, they won’t be able to marry up the fact you are punishing them for something they did hours earlier. It simply won’t compute in their brains.

The point is, unless you catch your Frenchie in the act, it’s pointless punishing them after the event. However, if you do catch them doing something wrong, you can discipline your French Bulldog there and then with some firm words and body language – which I explain in the next point.

3. Use firm body language and tone of voice

Dogs understand change in voice and tone, and even your chosen body language at the time of punishment.

My preferred French Bulldog punishment method is to say a firm “no”, and raise my arm and finger, whilst also changing my facial impressions from a smile to a frown.

I believe that this is a great way to discipline a Frenchie because you’ve gone from happy to firm… but without losing your cool and hurting them.

You’re the pack leader and alpha, and this is how punishment should be meted out rather than shouting or hitting. Loud voices and pain will be interpreted as a threat, rather than something relating to their behavior.

After you have disciplined your Frenchie and you get the required result, you should always reward their good behavior.

French Bulldogs brains will become trained with rewards. If you are teaching them how to recall and come back to you, give them a treat each time they get it right.

By withholding a treat, you can punish them for getting it wrong.

5. Take breaks and give them a timeout

One of the ways we taught Claude not to bite was without time outs and verbal clues.

For example, if we played and he nipped at us, we would say a firm “ouch”, turn our backs, and walk out of the room, stopping the play which was the last thing he wanted to happen.

He soon learned that if he bites us when playing then the playing would stop for probably what seems like hours to him – timeouts are a fantastic way to discipline Frenchie puppies because they just want to have constant fun with you.

Handy Hint: Find out what games we play with our Frenchie for ideas, plus a list of the best toys you can buy to keep them mentally stimulated.

This is not something I have ever tried, and in truth, knowing my Frenchie, he would probably think it was a game as you can see in the YouTube video below. The video is from our French Bulldog Owner Youtube channel (subscribe here).

However, some owners swear by this punishment and disciplinary method. All you do is squirt your Frenchie with water when they misbehave, combined with a firm “no” command.

If all else fails, you can try distracting your Frenchie to stop them doing what you don’t want them to do. This was a method I would use in public with Claude, as often it was the only way to get him to stop being bad as a young puppy.

For example, I was out on off-leash walk with him, and some little kids where playing ball. Claude ran over, got their ball and would not give it back, and even starting to jump up at the kids… he was only 5 months old at the time, so still very much an adolescent in the training phase.

The best way I could get him to stop was to call his name, get his attention, then pretend to run off myself. I made myself look far more exciting than the kids, meaning he then dropped the ball and ran after me, thinking he had a better deal.

It’s a classic distraction method and any type of distraction can work very well, if the discipline isn’t working or you don’t have time.

How you should NOT discipline your Frenchie

Here is a brief catch-up on all the ways you should not punish a French Bulldog. I won’t get into the detail on each one, as with a quick Google search you will quickly see how this is all very common advice with professional dog trainers (which I am not).

All of these punishment methods could lead to longer-term behavioral problems such as them developing separation anxiety (here’s what that looks like). Your dog could even start pooping or urinating in the house. If your Frenchie does start urinating indoors, here are some tips on how you can stop it.

There are some owners who say that if you only mark the dog behaviors you want with positive reinforcement, then there might not actually be any need for discipline.

I don’t entirely agree with that, as Frenchies can be hard to train. You can follow all the things I learned from Claude’s puppy days in my French Bulldog training guides.

The bottom line is that French Bulldogs don’t connect the punishment you give them with the action that have committed. That makes it hard for them to change the bad behavior, instead becoming fearful when shouting and hitting is used.

Timely actions and positive reinforcement is the best way to discipline a French Bulldog puppy and will result in a very happy dog – and here’s how you can tell.