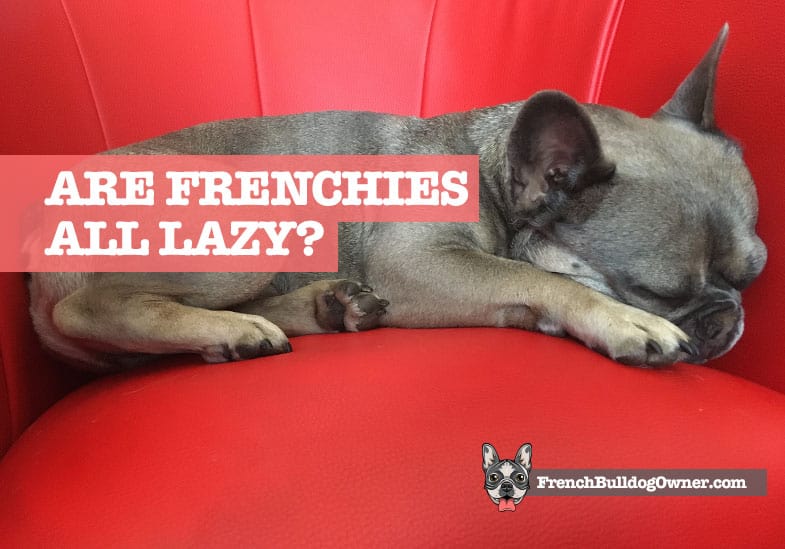 When you read dog blogs about Frenchies there tends to be a common theme relating to their character and personality; which is laziness. Often people who buy Frenchies for the first time will even choose this breed because they want a dog that won’t be as active as others. But just how true is it that French Bulldogs are lazy dogs?

Well, I own a Frenchie, and whilst they aren’t all the same, there are certain parts of their character which are very typical. So just how lazy are Frenchies? Let me explain with some real-life experiences, and videos.

There are certain characteristics that will lead people to believe that French Bulldogs are lazy dogs. However, this isn’t actually true; they are not a lazy breed and need stimulation. When Frenchies are active they can be very hyper, needing regular exercise each day to keep them happy.

I hate to break it to you, but French Bulldogs are not lazy!

All of this is based on the personal experience of owning a Frenchie, plus having been in the French Bulldog community for a number of years.

However, I can understand why there is this common misconception that all Frenchies are lazy, so let me explain in more detail.

Why people perceive Frenchies to be lazy dogs

There are certain ways that Frenchies behave that will make them look very lazy. It’ very understandable, and the truth is, for a lot of the day they will actually do absolutely nothing – so they can deserve this reputation.

For example, here are some typical French Bulldog personality traits which can create the impression of laziness.

1. Frenchies can sleep for almost 60% of the day

Our French Bulldog Claude will sleep a lot. I’ve previously written a blog about his sleeping patterns, where I recorded him nodding off for between 12 and 14 hours a day.

It understandable that people will look at these statistics and fall into the trap of believing in Frenchie laziness.

Don’t let this lack of action fool you into thinking Frenchies are lazy though.

When Claude is awake, he is VERY AWAKE, wanting to run, play, act hyper, and be the most hectic dog on the planet. Many Frenchies are exactly the same, demanding constant attention and stimulation.

2. Frenchies can be very stubborn and refuse to walk

One of the most common personality traits of Frenchies is their stubbornness. If they don’t want to do something, they won’t.

For example, sometimes your Frenchie puppy will just sit there and refuse to walk. Claude even to this day will sometimes struggle with recall commands, preferring to completely ignore me and only saunter over when he is ready.

This stubbornness can work both ways though, and can mean our Frenchie does what he wants, which can mean running, running, and more running until he can’t run anymore despite me trying to get him to stop!

3. Frenchies are brachycephalic and can struggle for breath

The flat face and squashed features that defines this breed, and also makes them popular is actually very problematic for their health. This physical trait makes them a brachycephalic breed leading to breathing problems, and difficulty coping in hot weather.

Because of this, you might assume that Frenchies won’t over-exert themselves and will be lazy, but the opposite is unfortunately true.

My experience of Frenchies is that they don’t know when to stop. They can run themselves into the ground even when they are struggling to breathe.

Claude is a perfect example. If I let him run around our garden, he would do it until he dropped so it’s up to us to monitor his activity and bring a stop to it before he gets too worn out.

4. Many Frenchies will be overweight

You will see lots of fat Frenchies on social media and could fall into the trap of thinking this is a normal look and offer confirmation bias of them being lazy dogs.

The truth is, Frenchies should not be overweight, and require regular daily exercise and a sensible approach to diet and snacks. I wrote a guide about fat French Bulldogs and how to keep their weight in check only last month.

The truth about Frenchies being lazy dogs

Hopefully I’ve given you some insight into why people believe all French Bulldogs are lazy. Of course, all dogs are different with their own personality, so it’s not to say there aren’t Frenchies who are completely lazy – it’s just that I am yet to meet one.

The truth is, this breed needs a lot of stimulation and attention, and far from being lazy they are actually very active when they aren’t in sleep mode.

They are very funny and can quickly go from one extreme to the other. One minute your Frenchie will be snoring his head off, the next minute running “zoomies” around the room or garden and yard.

Handy Hint: If you’ve ever wondered why Frenchies get the zoomies and run like crazy then I think I might be able to help with my zoomies explanation.

There’s no real in-between status with Frenchies; they will either be chilling out or being manic and hyper. You can see some classic examples of their non-lazy behavior in this video from our YouTube channel showing the different ways Frenchies like to play.

Many people think that Frenchies will easily slot into the sedentary and chilled lifestyle of the owner. Whilst of course this is true to a certain extent, it doesn’t mean Frenchies are lazy enough to not need walks and regular exercise.

Without exercise they will get bored, possibly even destructive, and almost certainly will put on weight leading to health problems. As owners, you have an obligation to walk your Frenchie no matter how lazy you think he or she is.

Handy Hint: Read my guide to how often you should walk a Frenchie, how far, and what the limits should be on daily exercise.

This breed needs to be walked at the very least, once a day, twice if possible. They have energy to burn, and a desire to be active.

You do need to be careful though!

Whilst you should exercise them, you do need to be very careful to not overdo it. It’s very easy for Frenchies to overheat, and you will need to keep them cool in the hot summer months (here’s how).

In fact, only this week the BBC published a news article highlighting some research by Nottingham Trent University which showed this breed is more prone to heatstroke than others.

The study found that French Bulldogs were in the high-risk category of overheating due to their restricted breathing; the brachycephalic issue I mentioned earlier.

A spokesperson from the Dogs Trust charity said:

“These findings show that owners of flat-faced breeds and dogs who are overweight need to keep an especially close eye on their beloved pet during the warm weather as they could be at greater risk.”

Whilst Frenchies are not lazy, that doesn’t mean you should take them on long hikes or expect them to be good running partners. This breed will not be able to handle that level of activity, and it can be actually be extremely dangerous.

It all boils down to how you define laziness.

Our Claude sleeps so much of the day, but when he’s up and about he’s more than a match for dog breeds that you typically think of as being active.

However, I won’t dispute that some owners might have Frenchies they say are lazy. Whilst there are some breed-specific traits, all dogs have their own personalities so there will be outliers.

Overall though, I disagree with the statement around this breed being lazy dogs and believe owners should keep their Frenchies well exercised and active.

Both you and your dog need this for mental well-being!