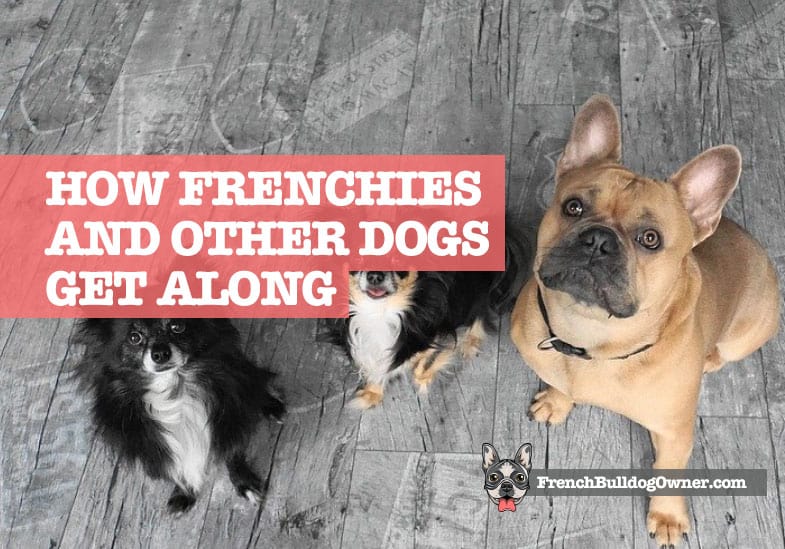 One of the most common questions I’m asked by people thinking about getting a Frenchie is how well they get along with other dogs. It’s essential if you already own a dog, have family and friends with dogs, or are planning on getting your existing Frenchie a companion.

What I am going do is relay our personal real-life experience of Frenchies. This will include how good they are with other dogs, how we’ve seen our own dog playing, and seeing other Frenchies playing too. Let’s get started…

However, it’s important to understand that all dogs are different and will often be a product of their environment. That means if you don’t treat your Frenchie well, haven’t trained and socialized him properly, or he’s got some behavioral issues, then yes, your French Bulldog might not along with other dogs.

But I would say that this is the exception to the rule, rather than the norm based on my personal experiences. Here’s what I’ve learned, and what you can probably expect should you decide to get a French Bulldog companion.

How Frenchies get along with other dogs: a personal experience

If you’ve watched any of our YouTube videos of Claude the Frenchie you will know what a happy disposition he has. He’s not got an aggressive bone in his body and just wants to play constantly… and that applies not just with my son, but also with other dogs we know and come across on our walks.

A few caveats first though. The reason I think our French Bulldog is so good with other dogs is down to a number of points:

You can see our Frenchie getting along with other dogs in the video below:

How our Frenchie behaves with other dogs

The video above will give you a taster of how good a French Bulldog can be with other dogs. From a young age we’ve found it very easy with Claude, and this is probably due to the points I raised earlier.

When we go for walks, Claude will be let off his leash once we get to the local dog park or woods. 9 times out of 10 there will be other dogs out and about and our Frenchie will want to play with them (and vice versa).

Handy Hint: Read my guide to leash training your Frenchie so you know what to expect when out on public walks near other dogs.

What tends to happen is that Claude crouches down when he sees another dog, which is his playful and submissive stance. He will then watch the other dog for about 10 seconds and then start to run at a full pace (which is very fast) towards the other dog.

If the other dog reciprocates and wants to play, then it’s game on and the two of them will start to chase each other and play fight or do tug of war with a stick.

How things can go wrong

Whilst our French Bulldog thinks that every dog is a potential playmate, the feelings aren’t always reciprocated by other dogs. Not all will want to play!

Most of the time this is quite a placid interaction. Our Frenchie runs up to another dog who doesn’t want to play, and that other dog will not respond. In cases like this, Claude will read the situation quite quickly and turn around to find something else to do.

But there have been times when other dogs have reacted badly…

How a French Bulldog’s features can result in negative responses

Occasionally we have encountered dogs will react badly to Claude wanting to play with them. Some of the time you can simply put this down to a grumpy or naturally aggressive dog who just doesn’t want to play.

Other times though, it could be the Frenchie’s features that produce this response, and here’s why: Frenchies have a very expressionless face, with not many available expressions.

I’ve heard that some dogs do find it hard to read a French Bulldog’s face. That means another dog might see a playful Frenchie approaching, and think that the face they see is an aggressive one.

Let’s be honest, Frenchies only really have one facial expression apart from when they open their mouth wide, so you can forgive other dogs for thinking the wrong thing when encountered with the face below!

I am a member of lots of French Bulldog Facebook groups, and there have been a few posts from people saying their Frenchie gets attacked by other dogs, often for no reason.

Whilst we’ve not had this with Claude, perhaps some dogs do give off different vibes – who knows? I do believe some of it could be due to their lack of facial expressions.

How to avoid potential flash points

If you do decide to get a Frenchie and another dog breed, here are a few things you can do to help make sure that they get along:

What dogs get along with French Bulldogs?

And now for the practical part; what dogs do Frenchies get along with? Well, firstly I going to list the dogs that our Claude gets along with most – in other words, the ones he always plays with when we’re at our local park. These could be the perfect companion for your Frenchie.

Dogs that DO get along with our Frenchie

Dogs that DON’T get along with our Frenchie

Then there are some dogs that our French Bulldog has not got along (and this is one-way aggression from the other dog, not ours) are:

I think the dogs above that don’t get along with Frenchies probably get irritated by our breed’s clownish nature. Breeds like Border Collies who are bred to herd animals will probably try nip and herd a manic Frenchie!

All of the above is based on my own personal experience. I also decided to canvas opinion on social media to find out what other Frenchie owners say.

What dogs do French Bulldogs get along with?

Here’s a list of dogs that get along with Frenchies according to what other owners say:

Any of these breeds would be the best dog companion for a French Bulldog, other than another Frenchie of course!

Handy Hint: I believe that French Bulldogs are better in pairs. If you are considering getting a second one, read this guide to Frenchies in pairs first.

In all honesty though, I believe it all boils down to personality and compatibility. If you have an aggressive dog, he’s not going to get on with any other dog unless trained out of it.

Some of Claude’s best playmates at the park are big dogs. He plays regularly with dogs as large a Lurchers and English Sheep Dogs and holds his own against them.

French Bulldogs are good with big dogs, medium dogs, and small dogs! They really are not fussy about who they play with and probably don’t understand how small they are.

How to introduce a Frenchie to another dog

Once you’ve settled on which dog to get that will be good with your Frenchie, here’s a quick overview of how to introduce them. You can read the advice in full on the Natural Dog Blog.

Our experiences of Frenchies meeting other Frenchies

For me, the video below is a typical example of how well and how good French Bulldogs are with other dogs. They just get along (in the main) – watch below.

Please note that all of the advice and the list of dogs Frenchies get along with is purely anecdotal and based on my experiences and that of owners I spoke to. It doesn’t mean it will work for you as every dog is different, and breed should only be considered one indication of temperament.

I will conclude by saying one thing though; I have mainly positive experiences of Frenchies getting along with other dog breeds aside from a few exceptions. I hope you have the same!

Are you thinking about Frenchie ownership? If so, you might enjoy these additional guides to what they will be like:

link to The Best French Bulldog Bowl & The Size You Need

Anybody who owns a Frenchie will know how motivated they are by their stomachs. If there’s food to be had, a French Bulldog will wolf it down in super quick time. However, this can cause them...

Frenchies are characterized by their shortened and flatter faces. Whilst many people see this as part of their appeal, it can lead to dental problems, as their teeth has to be crowded into a smaller...