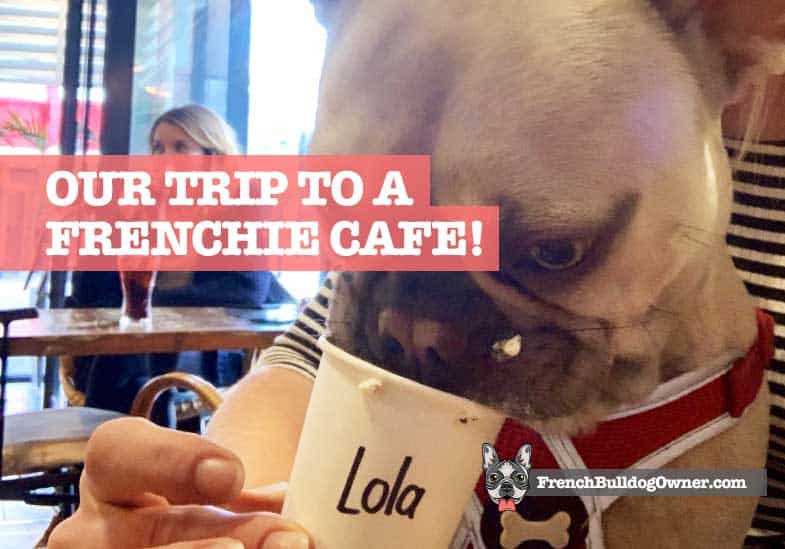 Last week we attended a Frenchie café in our local city. If you’ve not been to one before, let me explain how it works and what happens… and you can also see some photos from the French Bulldog café event if you keep on scrolling.

But firstly, this is what we were promised from the experience:

Watch the video we made of the event

The best way you can find out about Frenchie pop-up cafes in your area is to search on Facebook. That’s how we found that one we attended in our city. They actually advertise it as a Frenchie “pup-up” café!

Tickets cost us £7.50 as Frenchie owners, and kids cost £5. Your Frenchie actually goes for free, so we decided to take Claude and his girlfriend with us… and we received our personalised tickets via email with their photo we uploaded plus details on the date and venue.

What was also fun is that regular humans can go too, even if they don’t own a French Bulldog. In fact, we met a lovely couple there who came along to the café event just to meet as many Frenchies as they could!

The venue was at a bar in the city center. We arrived 15 minutes before the Frenchie café opened and joined a queue of other Frenchies and their owners. Over the next quarter of an hour, the queue got longer and ended up snaking around the street corner.

I would estimate that there was around 30 French Bulldogs in total, all waiting to get inside. Most of them were behaving themselves, but we did see one have a bit of scuffle with another female Frenchie in the queue… nothing too serious though!

We had a delay of 15 to 20 minutes in getting in though, as there was already a load of pugs inside the venue having their own pug café event… we had to wait for that lot to clear out which caused quite a commotion.

If you can imagine a line of people with 30 Frenchies in the middle of a city waiting to get into a bar, as 40 pugs then started coming out… people were stopping to take photos and stroke all the dogs!

We entered the bar, but not before we stopped to have a quick photo opportunity with the dogs by the French Bulldog café sign.

Inside the Frenchie Café

We entered the café and found ourselves somewhere to sit. There were plenty of chairs and tables laid out, so seating wasn’t a problem.

It was just like any other café in truth, but with a few differences;

Once everyone was in and settled, the organiser of the Frenchie café said that all the owners could go to the bar and get their dog’s complimentary puppuccino. This was a really nice touch.

I went to the bar and the girl there asked what the names of our Frenchies were. She had personalised cups with the Frenchie’s names on, with some kind of frothy dog-friendly cream in it, and a little bone-shaped biscuit.

The dogs loved their treats and scoffed down the puppuccinos in no time. I have no idea what the creamy froth was, but they seemed to like it… however, I did see one Frenchie vomit his up. Rather disgustingly another Frenchie came along and licked it all up… gross, but funny!

The organiser also told us we could let our Frenchies off their leads. I was a little worried about this, but I needn’t have been.

Once the dogs were let off the leash, they explored the bar, sniffed the other Frenchies out and generally just got on with it.

We went to one of the snack stalls and bought the dogs a Frenchie Café themed biscuit each. One didn’t like his, but the other wolfed hers down in seconds!

This really was a great day out and I recommend it to any Frenchie owners who want to mingle and meet with other owners. It was well organised, with the only complaint being the delay in getting in due to the pug cafe over-running their time slot.

In terms of getting what we were promised, I can’t recall seeing any tunnels and ball pits for the Frenchies to play in but in all honesty, our Frenchies would have been far too occupied anyway!

Overall it’s a great way to get your own French Bulldog socialised with other Frenchies and used to noisy and hectic environments.

There were no issues inside the café as far as I can tell, with no barking or aggression. To be honest, I think for our Frenchies, the café blew their minds. It was probably a sensory overload and they spent most of the time walking around meeting people and other dogs.

The hour passes very quickly, so make sure you make the most of it!