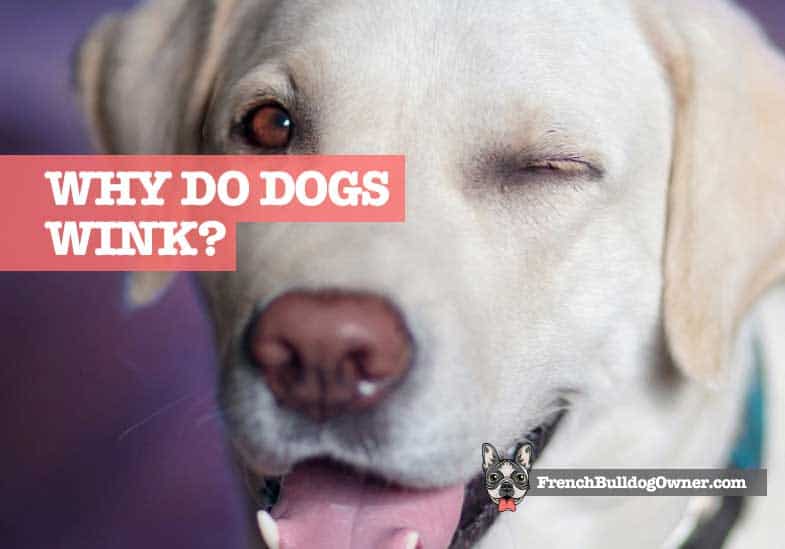 Have you ever seen your dog wink and wondered what they’re trying to say to you? Or perhaps you think your dog might be winking too much and have a health issue? In this guide to winking dogs I am going to answer all the questions you have about your dog winking and what it could mean.

Why do dogs wink? Dogs will wink at their owner to indicate happiness, as a sign of submission, or where they are imitating human behavior. However, if your dog is excessively winking and blinking it could be the sign of an eye problem and require the attention of a vet.

So that’s the short answer, but let’s now get into a bit more detail about why dogs wink at you, what winking with one eye means, whether your pooch is winking too much and when you should be concerned.

Why do dogs wink back at you?

Have you ever thought that your dog is trying to communicate with you via their eyes? You wouldn’t be the first!

All owners will understand at least a few of these already. Whether it’s the dog pawing at the door because they want to go outside or resting their head on your knee when they want attention. From spending enough time with your dog, you can gauge what they’re trying to say to you.

In fact, recent research has found that over time dogs have evolved to give the “puppy dog eyes” we all know and love in order to communicate better with humans (read about the findings on TheGuardian.com).

With that in mind, it will come as no shock to believe that dogs do intentionally wink in order to send a message to their owner. It’s undoubtedly become part of their genetic make-up through thousands of years of being domesticated.

So, what are dogs trying to say when they wink at you?

Why is my dog winking at me?

Dogs, like a lot of animals do not use facial expressions to communicate but after thousands of years of living with humans they have developed their behavior to manipulate us and to adapt to our wishes in exchange for food and love!

1. Winking because they are submissive

Between dogs, eye contact is a sign of dominance and aggression. You will notice that just before dogs start fighting there will be a period of intense staring first.

If neither breaks the eye contact (an act of submission), a fight will ensue for either to assume dominance over the other.

When your dog stares at you, they don’t want to fight you, and so when you stare back, they will either look down or start to wink at you.

This behavior shows that they are submitting to you as the dominant one of the pack. The wink is to break the stare and to keep the peace.

2. Winking because they are happy

An angry dog won’t be playful. A submissive dog will be and will want to have fun.

The happier your dog is, the more he will wink at you or back at you and as well as the winking there are other signs to look out for to make sure your pooch is content.

Handy Hint: Read the signs to watch for if you are worried your dog might not be as happy as he can be.

3. Winking because they are imitating you

Another possible reason for the winking is that your dog may be imitating your behavior. Dogs are extremely intelligent and can start to mimic their owners the more they are around them.

It usually starts with things that you may not notice, for example sleeping when you sleep, resting when you rest, getting excited when you’re excited. This can develop into little gestures too.

If you wink a lot at your dog, they may pick up this behavior and repeat it back to you. Imitation behavior is more apparent when there is more than one dog in your home, younger dogs will follow the lead of the older dog.

Imitation behavior can be beneficial when training new behaviors in dogs. Rescue dogs that have come from abusive homes will be reintegrated back into new homes with the help of healthy adult dogs.

Once the rescue dog adopts the adult dog as their role model, they learn to drop the psychological problems that were affecting their behavior and start to act more like the adult dog.

Handy Hint: Don’t confuse winking with blinking. It might be that there is some hard gunk in your dog’s eyes that need cleaning out.

What if my dog winks too much?

If your dog seems to be excessively winking and blinking it may point to a genetic condition called entropion (read more on PetMD.com). Entropion is where the affected eyelid flips inwards towards the eyeball causing irritation.

This condition can be extremely painful and if left untreated could lead to ulcerated corneas and blindness. If you notice a lot of weeping, soreness or excessive winking or blinking please consult your vet.

Handy Hint: We own a French Bulldog and this breed are prone to a range of health issues including red eye. You can read more about what red eyes mean in a dog here.

How to train your dog to wink

If you love it when your dog winks at you with one eye but want to make this happen on command or more often then there are ways in which you can teach this behavior.

Dogs love to please their owners and behavioral shaping encourages your dog to behave in a certain way. It’s an extremely useful concept to understand when training your dog. The more you understand about shaping the easier it will be to train your dog.

Behavioral shaping is the use of a number of steps to teach your dog a new behavior. By breaking it down into achievable steps it will speed up the learning process and take the confusion and frustration out of training.

Furthermore, as your dog learns more behaviors through positive reinforcement, they will enjoy their training and it will become an enjoyable experience for both of you.

Designing the right steps for the target behavior is key and with a good shaping plan it should be easy for your dog to succeed its target behavior. If your dog is confused as to what they should do, it may be necessary to add more steps depending on the complexity of your target behavior.

Aside from what it means when a dog winks at you, there are other things you might also want to know the reason for. Here’s a short selection of questions and answers of other behavioral traits and the possible meanings.

Why do dogs put their paw on you?

Pawing is a behavior that your dog may display to humans and to other dogs to ask for attention.

This is not a display of dominance but if it annoys you and you want them to stop do not reinforce it by showing affection.

Why do dogs sigh?

Moans and sighs from dogs are the common signs of pleasure.

Signs of contentment include the sigh that precedes dogs resting their head on their front paws or low-pitched moans from puppies.

How do you tell if your dog respects you?

Looking at your dog’s interactions with you will show whether they respect you.

Submissive behavior such as happy tail wagging, lip licking, and ears laid back all indicate that you’re their leader and they respect you.

Why do dogs wink with one eye?

One eye is a wink, two eyes is a blink.

As discussed, dogs wink with one eye for a possible number of reasons including happiness, submissiveness, and human imitation.

So the next time your dog winks at you, you now know what it could mean. Embrace it and encourage it, as in most cases it’s the sign of a loving dog who wants nothing more than to please you and be in your company.