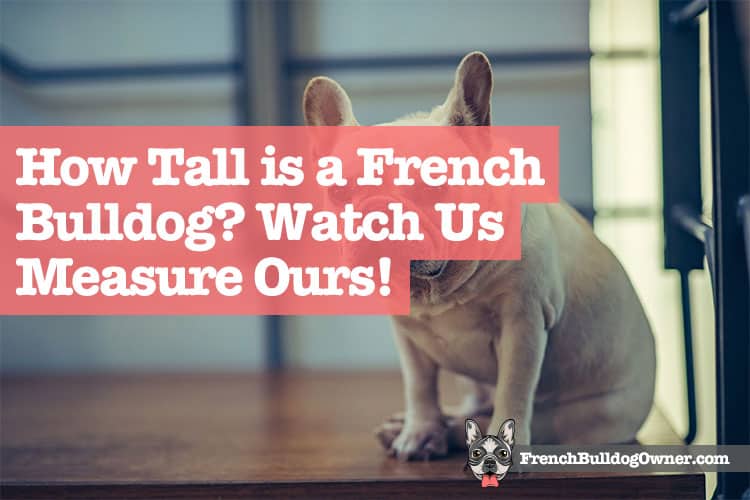 Frenchies are a great dog if you want something small with a fantastic character. But what is the height of a French Bulldog and how tall are French bulldogs on average? Plus how high can you expect yours to grow if a fully grown male or female?

How tall is a French Bulldog? On average, the French Bulldog height measurements are 11 to 12 inches tall for a healthy adult male, with similar average heights for females too. In terms of how tall a Frenchie is, that equates to around 28 to 30 centimetres high once fully grown at 9 to 12 months old.

But don’t let that lack of height fool you. Frenchies can be a handful, despite not being that tall! Here are some average French Bulldog height measurements in different units:

That’s how tall French Bulldogs get, but there can be exceptions to the rule (which I will go into below).

For what they lack for in size, they certainly make up for in character. In fact, if you have seen videos of our Frenchie, Claude, you will know that he’s small compared to other breeds, but full of beans.

However, compared to other Frenchies, I was convinced Claude was a little taller than others. I came back from a Frenchie meet up recently and asked myself was is my French Bulldog so tall compared to the others. You can see what our French Bulldog height in cm is in the video, but why is he taller?

I can’t say for sure, but he’s not as squat as others I have seen. I can only assume they might be another dog’s genetics in the recent lineage to account for the legs that are longer than other Frenchies I’ve seen.

In fact, we decided to measure Claude to see how tall he was, and you can see the results in the video below… if you can call it that. Watch for yourself and see how hard we found it to measure his height. I would love to hear from you if you have also decided to measure your French Bulldog height.

In this bullet points below you see exactly how tall French Bulldogs get dependent on what age and gender they are (based on averages).

If you would like to help contribute to this experiment and share the height of a French Bulldog in your household, please contact me via social media.

All I need to know from you are your French Bulldog measurements including the height, weight, and length, plus how old they are in months.

How tall do French Bulldogs get

As you can see, there is no hard and fast rule on French Bulldog height over than the averages based on what’s typical. However, it is possible to make a prediction on how tall yours will get.

In simple terms, the height of a French Bulldog can be predicted using these two metrics.

Those two rules of thumb will let you come up with a reasonable idea on how tall your Frenchie will grow to be. And not just in height terms, but also his weight.

Another way to predict how tall your male French Bulldog will grow is to find out how tall the father is. Similarly, you can do the same by comparing female puppies to how tall their mother is.

Handy Hint: To help your Frenchie develop properly and grow to their optimum height you should feed them quality food with plenty of nutrition. Genetic and environmental factors can also play a part, so keep your Frenchie happy and healthy.

How tall do female French bulldogs get?

Whilst every Frenchie is different, on average male and female French bulldogs do tend to be as tall as one another.

There are some physical differences though, with females typically having smaller heads. The females also don’t look as “bulldog” like with the strong muscular physiques.

Males will weigh a little more on average, between 2 and 4 pounds being the difference. But most of what weight appears to be made up of muscle, rather than their actual height.

As with any dog though, you can certainly have ones that don’t conform to the norm!

I’ve seen lady Frenchies who are taller than our dog Claude, and bigger looking, but it’s not a common occurrence.

How tall are French bulldog puppies?

Well this very much depends on how old they are. In the photo below, you can see Claude when he was around 14 weeks old, just after we got him.

In this photo you can see him playing with my wife in the garden, and I would estimate at this age he was around 6 inches tool when you compare him to the size of her boot.

Another thing to mention, would be how our cat got used to his size and height.

When we first got Claude, he was a young puppy, and way smaller than Poopie, our cat. I believe that by him being smaller in height than her definitely her get used to him. Despite his playful nature and annoying behaviour towards her, I don’t think she ever saw him as a threat.

You can see the difference in size between the two of them when he first arrived in the photo below.

Now he is much taller than Poopie, but I think she still seems him as being smaller than her.

They get on like a house on fire, but she’s still very much the boss and dominates him despite him now being larger than her.

Handy Hint: You might be interested in seeing how we got them used to each other. Here’s a guide on introducing Frenchies to cats with some tips and a video.

How tall are French bulldogs compared to other breeds

Lastly, I thought it would be interesting to show some comparative data on the heights of other dog breeds. This might make things easier for you in trying to visualise how tall a Frenchie could be compared to other breeds you might be more familiar with. Here’s what I found when looking at the heights of some of the most commonly owned dogs in the world:

When do French Bulldogs stop growing?

As you can see from the video further up the page, Claude is around two and a half years old now, and he’s as tall as he is ever going to get! But at what point did he get to be that tall?

From memory I think he matured in French Bulldog height and length just after he was one year old, which isn’t unusual compared to the averages.

From what I have researched, it seems that French bulldogs tend to get to their fully grown size between the ages of 9 and 12 months. They can then get bulkier and heavier to their maximum growth by around 2 years old, when they will have filled out with muscle.

So now you know how tall a French Bulldog is when fully grown, how about another experiment? My son and I decided to see how high our Frenchie can jump so took a tape measure and headed up to the local park. To see the results, head on over to our latest blog post about how high Frenchies can jump, including couches, beds, and fences.

If you enjoyed the video of me trying to record French Bulldog height measurements then you might also like this recently recorded the top speed of a French Bulldog. We used GPS and radar to track how fast Claude would run when chasing a stick. See how we did it in this blog post about Frenchie’s running fast and watch the video below.