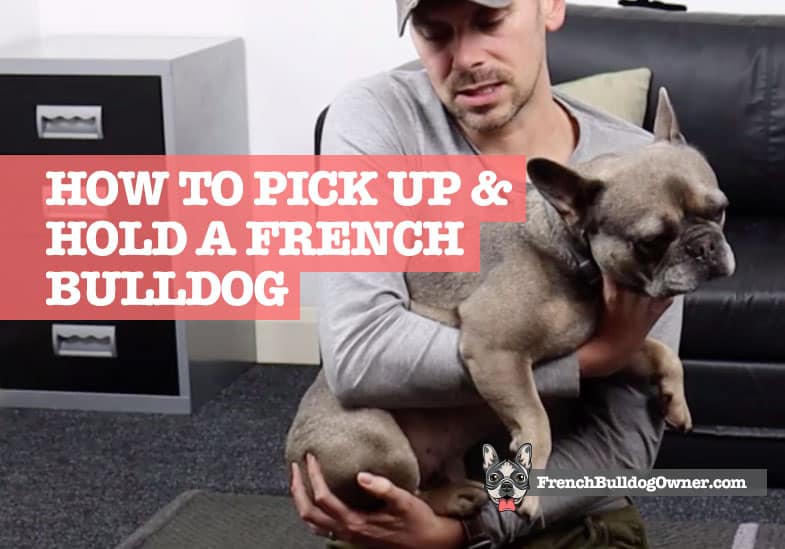 This week we published a new video on the French Bulldog Owner YouTube channel (subscribe for weekly updates) which showed you how to pick up a Frenchie. You can see that video below which also comes in handy if you want to know the best way to hold a French Bulldog.

How do you pick up a French Bulldog?

Watch the video below to see how I do it.

Step by step guide to picking up your Frenchie

If you can’t watch the video or listen to what I am saying, here are some quick text-based instructions and photos to give you guidance instead.

1. Give your Frenchie a verbal cue

By using a verbal cue every time, you can get your Frenchie used to being held and picked up. Something as simply as “up” or “lift” works very well.

By always doing this when you are just about to pick them up, it means they won’t be surprised and should over time become more accustomed to what’s just about to happen.

2. Place one up under and between the front legs

Using your stronger arm, place it under your Frenchie’s body and then through his two front legs so your hand is held on his chest, just under the neck.

3. Use your other arm under the back legs and backside

Now with your remaining arm, go under the Frenchies lifting the back legs up and tucking your arm under the legs and backside.

When you’re happy that your Frenchie is being held properly and securely, you can start the lift.

The method outlined above is perfect for dogs that weigh 25 pounds and under. That’s most Frenchies…

In my video I also show another method you can use for holding them, but that method does mean their legs are trapped at the front. I don’t like that holding method as believe it’s not as safe, should the dog jump and need to land safely on his feet.

Do French Bulldogs like to be picked up? French Bulldogs love attention and cuddles, so most will not mind being picked up. However, each dog is different and the best way to make them comfortable with being held is practice and giving them a verbal cue before the lift.

How NOT to pick up or hold a Frenchie

Now you’ve seen how to properly hold a French Bulldog I wanted to share a few ways you should not do it.

Don’t pick them up by their scruffs

This is a common mistake with people who own smaller dogs. They think that because a dog’s mother picks their puppies up by the scruff of the neck, then it’s ok for us to do it.

This isn’t the case with adult dogs. It can really hurt them to picked up in this way, so please don’t do it.

Don’t pick them up by their legs

Similarly, I’ve seen many people pick their dogs up by placing their hands under the legs and hoisting them up by their armpits.

This and pulling up by the legs can also be very painful for a dog. It can lead to dislocations, strains, and ligament damage.

Don’t pick them up by their tails

This is a picking up method that no sane adult would do, but it something kids can do with smaller dogs. Keep an eye on your children and teach them how to hold a French Bulldog properly when you first get a puppy.

Being picked up by the tail can lead to intense pain due to muscle and nerve damage. Tail dislocations and injuries can even lead to a loss of movement and inability to go the toilet.

Don’t pick them up by their collars

Again, this is mainly a mistake that young kids will make. Not only can it temporarily cut off the air supply and strangle the dog, it could also lead to damage to their trachea.

Holding your Frenchie incorrectly can be potentially risky. By starting to practice and giving your dog a warning that you’re just about to do it, you can reduce the chances of them struggling and possibly falling, leading to an injury.