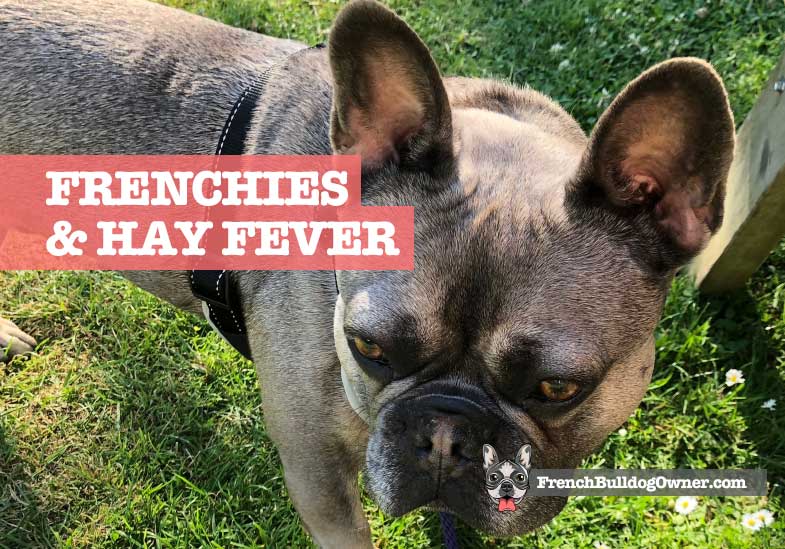 Frenchies are prone to a high number of illnesses and ailments, with allergies being at particular high levels in this breed. There are many reasons why your Frenchie might have watery eyes and a runny nose, but how likely could it be that your French Bulldog has hay fever? I decided to find out…

So, if you’ve seen your Frenchie with a runny nose, itchy and watery eyes, sneezes, and coughs, then it could be hay fever if displayed in the warmer spring and summer seasons.

Do French Bulldogs get hay fever?

Whilst not all Frenchies will suffer with hay fever, with estimates placed at 10%, some certainly do get it. Here’s what the Purina dog food website has to say about this particular allergy:

“Some research has indicated that dogs that are not exposed to a variety of grasses, trees and plants in their early life are more likely to develop signs of dog hay fever later on. Sensitivity to these kinds of pollens is generally more likely to occur in pets that haven’t built up immunity to them, which happens through exposure during early life.”

Purina than go on to say that certain breeds of dog are more prone to hay fever reactions more than others. Breeds that say are more likely to suffer include Dalmatians, Irish Setters, Poodles, Schnauzers, and West Highland Terriers.

Whilst they don’t reference Frenchies, my assumption would be that French Bulldogs might also be prone to hay fever due to their narrow airways. You could come to the conclusion that just the slightest of allergies will be worse for them, as just a little nasal swelling and blockage will result in pronounced breathing difficulties.

The Pets 4 Homes website also reference a different study that reveals as many as 1 in 10 dogs in the UK suffer with hay fever. Here’s what they say:

“As many as 10% of all dogs in the UK are thought to suffer from hay fever to some degree, and while in some dogs this might just mean the odd sneezy spell or the sniffles, for some dogs, hay fever can be fairly pronounced. Research even suggests that dogs in urban areas that are not exposed to a lot of plants and grass from an early age may be even more likely to develop hay fever than dogs that live in the country.”

It could be that if you live in the city, your French Bulldog will get hay fever worse come the summer months due to their lack of regular exposure to plants and grass.

The peak hay fever season for Frenchies in the UK is from late March to September time (source: NHS). In the United States it can happen in spring, summer, and early fall. Typically hay fever is worst during warm, humid and windy weather. These conditions make the pollen count rise.

Dog pollen allergies start off just like they do for us. Plants and flowers release microscopic pollen granules which get up their nose and in their eyes.

In humans, we tend to sneeze with have runny noses and eyes. Frenchies get this too but can also get itches all over their body as well, making their suffering even worse.

You can tell if your French Bulldog has hay fever if he is showing any of the following signs:

Your Frenchie doesn’t have to exhibit all of these hay fever symptoms above. Some French Bulldogs might react to a high pollen count allergy with just one or a combination of all the signs listed.

Whilst hay fever can develop at any age, it’s more likely that your French Bulldog will get hay fever symptoms from a young age and continue to exhibit the signs with each season.

French Bulldog hay fever and dry eye are often confused, and it’s easy to see why. Both can result in runny and itchy eyes – I wrote about red eyes previously.

As with any health issue, rather than trying to self-diagnose your dog, please do seek professional veterinary advice. They will be able to run tests and conclude what the issue is.

You cannot completely cure hay fever, but you can help to reduce the impact it has on your Frenchie’s quality of life. Here are some ways you can prevent or treat canine hay fever.

1. Wipe your Frenchie’s coat down

After a walk out in the grass, wipe your Frenchie’s coat down with a damp cloth. This will remove any pollen they could have got trapped in their fur and should reduce the risk of skin allergies and hives.

2. Bathe… but not too regularly

If your Frenchie has pollen all over his coat it might be far better to give him a bath or shower. You can buy special dog shampoos, some of which I’ve listed in my guide to bathing a Frenchie.

Don’t bath your French Bulldog too often as this can dry out their skin and lead to more irritation – here’s are some guidelines to bathing frequency.

I have read that hay fever pills don’t work particularly well with dogs, with the best treatment often being a targeted antihistamine. This can take the form of a nasal spray or eye drops prescribed by your vet.

There is also online commentary saying that dogs can take human hay fever treatments, but I would proceed with extreme caution.

The advice on what human hay fever medication is suitable for dogs might be ever changing, so please read this guide on the VCA Hospitals website, written by professional vets.

“Benadryl (diphenhydramine), Zyrtec (cetirizine), and Claritin (loratadine) are commonly used antihistamines that relieve allergy symptoms or counteract allergic reactions. Antihistamines are usually safe but make some dogs drowsy and others hyperactive. OTC antihistamine preparations may contain other ingredients such as decongestants that are not safe for dogs. Read the label carefully to assure that the product only contains antihistamine.”

Important: I do not recommend giving your dog human medicine unless you have been advised to by a professional vet. I am not a vet so please get their opinion first. Some human antihistamines are toxic to dogs so only give your dog these medicines under direction of your vet.

The Blue Cross animal charity say that the following can also be used for treatment:

Of course, the best way to prevent your French Bulldog getting hay fever will be to limit his exposure to the triggers. This will almost be impossible, but you can try the following:

If you think that your French Bulldog has hay fever, then you should book a vet’s appointment. Canine hay fever can be easily confused with other health problems so it should be looked at professionally.

By doing so, the vet can rule out a more serious problem, and develop a treatment plan to suit your French Bulldog’s hay fever symptoms.