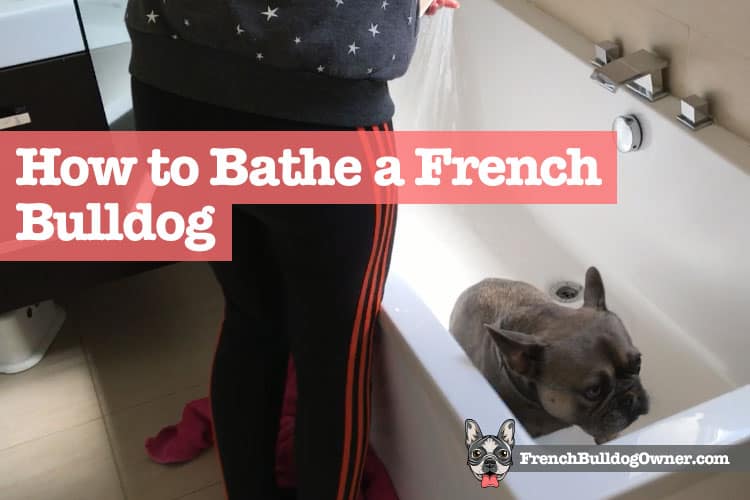 We live near a forest, and it gets very muddy! That means that we have to give our Frenchie a bath or shower a couple of times a month after we get back from a long walk. Claude loves to cool himself down in muddy water and gets filthy – we call this his “bog-trotting”, and whilst it’s funny, it leaves us with a big job to do.

However, over the last couple of years, we’ve managed to get our Frenchie bath time down to a tee, with minimum fuss or stress, and with a calm dog who’s not scared.

In this guide we will show you how to bathe a French Bulldog, but using the shower for cleaning, rather than an actual bath with water filled into it. You can also watch the showering process in our French Bulldog bath video shown further down the page.

The reason we use the shower head is that a lot of dirt comes off Claude, so it’s far cleaner using the shower method. It’s better than having him sat in a bath of dirty warm water – I suggest you do the same for the best results.

How to bathe a French bulldog video

Watch the video first which shows you how to shower and wash a French Bulldog puppy in your bath, then see some photos and additional tips further down the page.

How to wash a French Bulldog in a bath and shower

Before I show you how we do it, take a look at the photo below. This is Claude out in the forest where he loves to go and play.

He is a typical Frenchie and loves rolling around in mud. He thinks getting filthy is hilarious. We will get him home and he will then make a huge mess of our house. As you can see, he will definitely need a bath after this!

1. Wrap your Frenchie in a towel

We have two towels; one for picking him up when he’s muddy to take him to the bath and shower room, and then one for drying him off afterwards.

He is usually so caked in dirt, that we don’t want him walking through the house to the bath and shower room, so wrap him up and carry him in to avoid having to do even more cleaning up.

2. Test the heat of the water

We then start running the shower water away from him until it’s at the correct temperature.

If it burns your hand, then it’s going to burn him, so have it a warm enough temperature to not scald his skin, but still warm enough to provide enough heat to provide a good clean.

3. Place your French Bulldog in the bath

This was the part that we initially struggled with when he was a younger puppy.

We didn’t know how to give a French Bulldog puppy a bath when we first got Claude, so a lot of it was trial and error, and to start with he would get panicked by the water.

He would try to leap out of the bath as soon as the shower was turned on, which made a lot of mess. By about the third time our Frenchie puppy was bathed and showered, he trusted us and no longer panicked. It’s been plain-sailing almost every time since.

Place your puppy or Frenchie in the bath gently and take things really slowly at first until they are used to it. You can see how much calmer Claude is now as he’s grown older in our French Bulldog bath video above.

4. Rinse him down with warm water

Before we even get the special doggy shampoo out, we will give him a quick rinse down.

Most of the time Claude has caked on dry mud which we will have to loosen up with the warm water and shower head.

We get rid of the bulk of the dirt before the shampooing.

5. Use a special dog calming shampoo

Since day one, we bathed our French Bulldog puppy with a special calming shampoo. You can see the one we use in the photo, but it’s not always available in the United States.

Most of these dog calming shampoos are very similar, and I recently found a dog shampoo on Amazon that appears to have good reviews.

Squeeze the shampoo out and then massage it into your Frenchie’s fur, getting behind his ears, under his neck, under his belly, down the legs, and even between the toes if you can.

6. Rinse out the shampoo and repeat

Claude is usually so dirty that we need to give him one or two more applications of doggy shampoo.

We find that his underbelly and under his neck is where most of the dirt is due to the way in which he gets into mud, so give that an extra rub through and rinse with the shampoo and warm water.

The best shampoo for French Bulldogs will be safe to get into their eyes. However, that doesn’t mean you should not take care to absolutely avoid it.

Our Frenchie hates getting water in his face, and if we do accidentally get the water and shampoo in his eye (this did happen once!) then he panics and tries to jump out of the bath.

That’s not good for your Frenchie’s nerves or you and will make the next time you bathe your French Bulldog much more difficult – so avoid this at all costs.

8. Give him a brush through

We skipped this part in the video, as he’d only had a bath the day before, but a lot of the time we will give him a brush before we dry him.

Showering a French Bulldog results in a lot of hair, so it’s a great opportunity to get some of that shedding hair off him whilst you have a good opportunity at bath time.

9. Dry your Frenchie with the second towel

Once you’re happy that he’s clean and you’ve completed the mission to shower your French Bulldog, it’s time to dry him.

Remember I said earlier we had two towels?

You can now use the second to wrap him and town him down, getting him as dry as your possibly can.

Handy Hint: You are probably going to need to use the other towel to protect you, as once he gets out of the bath he will give himself a really good shake, and the water goes everywhere!

10. Dry your Frenchie with a hair dryer (optional)

The strange thing about showering a French Bulldog is that they seem to smell worse once they have been bathed. It’s that classic wet dog smell.

One thing we tried with Claude was to give him an additional drying with my wife’s hair dryer, but on a slow heat setting.

As with his bath-time, he didn’t like it the first couple of times, but is now completely comfortable with it.

To really get him smelling better, try using a dry clean shampoo spray. You can see a photo of the one we use, and there are similar products available. You can see the latest prices for the dry shampoo on Amazon.

You simply give them a few sprays with it over their body. In our experience, it gets rid of the wet dog smell.

It’s also great stuff for carrying in your car as it’s a spray-on and non-rinsing shampoo that helps to cleanse their coat without using water.

Handy Hint: Despite your best efforts, he might still have slightly wet paws. This leaves a mess around the house, so for 20 minutes we will often put his blanket in his old puppy training crate, and put him in there until his paws are completely dry.

There is no cut and dry answer to this; some French Bulldogs do like baths, others don’t. If you have a Frenchie who is scared of the bath, the best thing to do is take it very slowly with baby steps and keep calm. Other people have Frenchies that absolutely love getting bathed and showered… it’s all down to their experiences (e.g. did they have a bad time), and their character.

How often should you bath French Bulldogs?

There is an argument amongst Frenchie experts is that you shouldn’t bath them too often. Bathing your Frenchie more than 5 times a year can mean that the oils in their skin can dry out.

But, if you have a Frenchie like Claude, that’s simply not practical as he’s always in the mud.

We have to bath our French Bulldog as and when it’s necessary; this might be every couple of weeks after a particularly muddy session in the forest.

For smaller clean-up operations we will use unscented wet wipes and a combination of the dry clean shampoo I spoke about earlier.

If you own this breed then will need to know how to give a French Bulldog a bath or shower at some point. Frenchies are notorious for rolling around in mud, poo, and even dead animal carcasses – we once stopped Claude rolling around on a dead rat… disgusting!

The bottom line is, don’t overdo the showering and bathing.

If you shower your French Bulldog daily or even more than a few times a week, you can dry out the essential natural oils they have in the skin.

If you do, I hope our little French Bulldog bath video and guide to showering a Frenchie has given you some help.