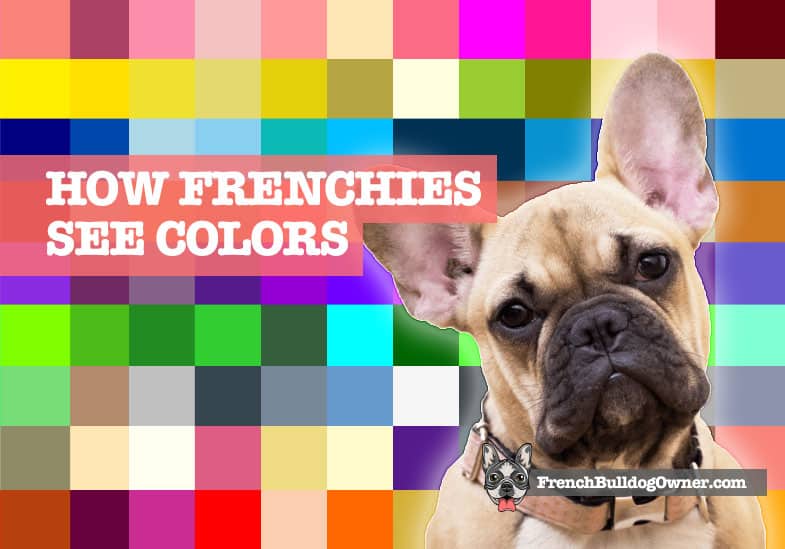 Our Frenchie Claude has two balls that are exactly the same, but he only ever runs to the yellow one in the garden before we start playing. This has always intrigued me as I’d heard that dogs were color blind and only saw black and white shades, so wondered what was making our French Bulldog running to the yellow ball each time rather than the red one?

To investigate further, I decided to research whether Frenchies can see color, and if they can, what colors can they see? You can read my helpful guide to what I found out below, but firstly here’s the short answer!

Are French Bulldogs color blind? Frenchies are not color blind but like all dogs are unable to see certain colors the way we do. For example, dogs don’t see the color red like humans do, instead seeing a yellow or blue color shades instead. It is not true that dogs only see in black and white.

French Bulldogs can see color, but in a different way to how humans do. Dogs have something called a dichromatic vision (see definition).

This means that unlike humans who have three color sensitive cone cells in their retinas for red, yellow and blue, whilst Frenchies just have the two; yellow and blue.

That doesn’t mean they cannot see color, it just means they see it differently to how we do. For example, below is a photo of what we would see when looking at an iconic red British phone box, versus how a French Bulldogs sees the color.

As you can see, rather than seeing a red colored phone box, your French Bulldog will see it as a green and yellow hue.

What do French Bulldogs see?

So, whilst we now know that French Bulldogs are not color blind, I thought it would be interesting to run some experiments to find out what colors French Bulldogs see. To help with this I found a really cool online tool which lets you mimic what dogs color ranges dogs visualize.

The Dog Image Processing Tool was created to help demonstrate the differences in visual perceptions between dogs and humans. You can upload images and then see how your dog might see the colors… which is what I decided to do!

For example, below you can see an image of a yellow tennis ball on the left, with what French Bulldogs see on the right.

As you can see, my French Bulldog can see the yellow color, although it is a little blurry. But enough for him to know it’s the ball he wants to go for.

Things change when you examine colors like reds as dogs find it easier to distinguish between blue colors than red colors. Look at these photos of a child’s ball pit, and how the red balls become more yellowy when looked at by a French Bulldog.

Based on this, the fact my Frenchie has been choosing a yellow ball in my garden each time is probably down to fluke or something else entirely – because it doesn’t look like he would be able to see a big difference between the two colors other than shade.

The bottom line is; Frenchie can see color changes, but with certain color ranges like reds they will be distinguishable as shades rather than a color.

What colors can French Bulldogs see?

Due to the fact dogs only have two color cones in their retinas, it means the colors French Bulldogs can see best would be yellow, blue, and shades of grey.

You might have heard the misconception that dogs can only in black and white. This has been debunked by scientists. It’s thought that this belief was seeded in 1937 when Will Judy wrote an editorial about dogs being color blind in a magazine.

On Andras Peter’s excellent Dog Vision website, there is a chart of RBG colors which shows what colors French Bulldogs can see compared to humans. I’ve included that below which is a great visual indicator to show that French Bulldogs are not color blind and can see colors, albeit not as many as humans.

On the American Kennel Club website, they say the following about the colors dogs are able to see:

“Dogs can make out yellow and blue, and combinations of those colors. This renders a lot of the world greyish-brown. That lush green lawn? It probably looks like a field of dead hay. That bright red velvet cushion? Still comfy, but it probably comes across as a dark brown blob to the dog.”

Next time you’re out and about throwing a ball for your Frenchie when playing, consider what they are actually seeing – it’s will look very different to what you see!

Handy Hint: Frenchies also see in the dark very different to how we do. Check out the photos I put together which predict how well your French Bulldog can see in the dark at night time.

Based on what I learned when putting this article together, it seems that I might want to re-consider the color toys I buy Claude our Frenchie. For example, he’s not really going to get the best benefit from a red toy compared to another as the color won’t look that vibrant and interesting.

From now on, as I know Frenchies see yellow and blue colors best I am going to buy him things like the toys below!

If you want to invest in some new gear for your Frenchie, please check out the following pages: