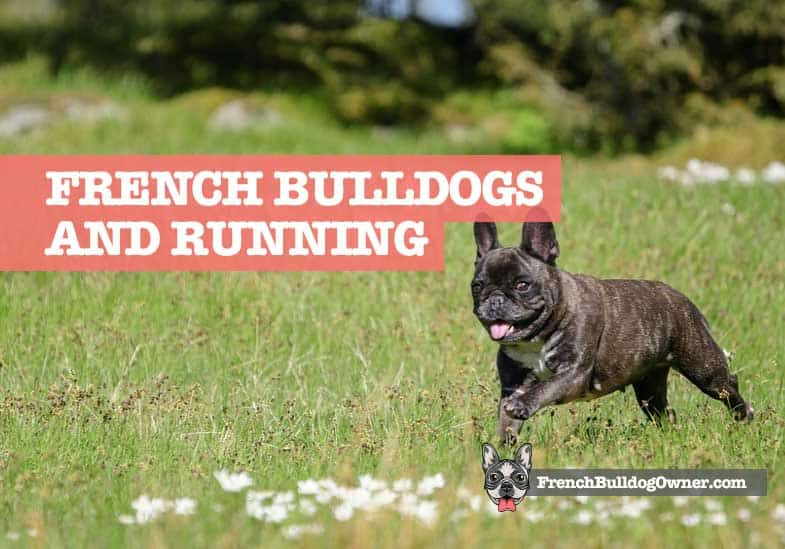 If you are looking for a dog to go running with, I don’t recommend a Frenchie. Whilst they will want to run and run, they don’t have the genetic and physical make up to run long distances and you could in fact compromise their health.

Please take this advice seriously. I speak from personal experience and have a story to tell about French Bulldog running and how it harmed our own dog.

Last summer my brother was dog-sitting Claude for us. He was looking after him for a couple of days whilst we were out of town.

My brother is a keen runner and likes to run daily 5k distances. Little known to us, he planned on taking our Frenchie out as his running partner for one of the days.

We had no idea he was going to do this and weren’t made aware of it until we picked Claude up the following evening. When we picked him up, he told us he had gone running with him and we thought nothing of it.

However, the next morning Claude struggled to get up from his sleeping space. For the whole day he was not himself, could not climb stairs in his usual manner, and was unable to jump up and down from our own bed.

I took him to the vet to get him checked out and explained that our French Bulldog was running with my brother the previous day. This, the vet said, was why he was aching and had lack of movement.

Now thankfully it appeared that all Claude had done was bruise his back and spine whilst being my brother’s running companion. With a prescription of pain killers and a bit of rest and recuperation he was back to his normal self within a couple of days.

But it could have been far more serious.

Our vet told us that French Bulldog’s running constantly for more than 20 minutes can exacerbate certain health conditions they are pre-disposed to having such as:

All of these potential health problems can be more problematic with certain activities, not just running with a French Bulldog. Other activities to limit include:

In addition to that, French Bulldogs can dangerously overheat if they are over-exert themselves. I’ve written a guide about Frenchie overheating recently which I recommend you read for more information on why it’s so risky.

I’ve seen at first hand just how worn out Claude can get if he runs with other dogs excessively for more than 10 to 15 minutes. He will pant a lot, and I will need to physically remove him from the situation and get him back home and calmed down.

The thing with Frenchies is that they often don’t know when enough is enough. French Bulldogs will run and run until they completely do themselves in. And that can be too late if you’re not careful.

In the summertime, excessive running can be even more risky. Thankfully our Frenchie was a running partner on a winter’s day, but it could have been so much worse.

Handy Hint: Find out what the 31 major health issues are that French Bulldogs are most prone to suffering with.

How fast can you run with a French Bulldog

If you really can’t go without a jog with your dog, then prepare to be disappointed. With breeds this small I would not recommend jogging any further than 1 mile (or 1.6 km)

However, despite Frenchies not making great running partners, that doesn’t mean they can’t run fast when they put their mind to it. Some of them can be deceptively speedy.

My son and I ran a test to see how fast our French Bulldog running could get to. You can see how Claude got on in the video below, and read the blog post on Frenchie top speeds to see the results.

What is the best dog to go running with?

So, I hope that explains why French Bulldogs don’t make for good running partners and companions. But what dogs are best to go running with? I took a look at some pet and fitness websites and here’s a list of breeds I found.

Whilst you might be tempted to take your French Bulldog running, I don’t advise you do. For the health of your dog it’s a huge risk. They aren’t designed for long-distance running or prolonged periods of activity, so please choose a different breed instead.

Handy Hint: You might also be interested in my notes explaining how far and how regularly you should be walking your French Bulldog.