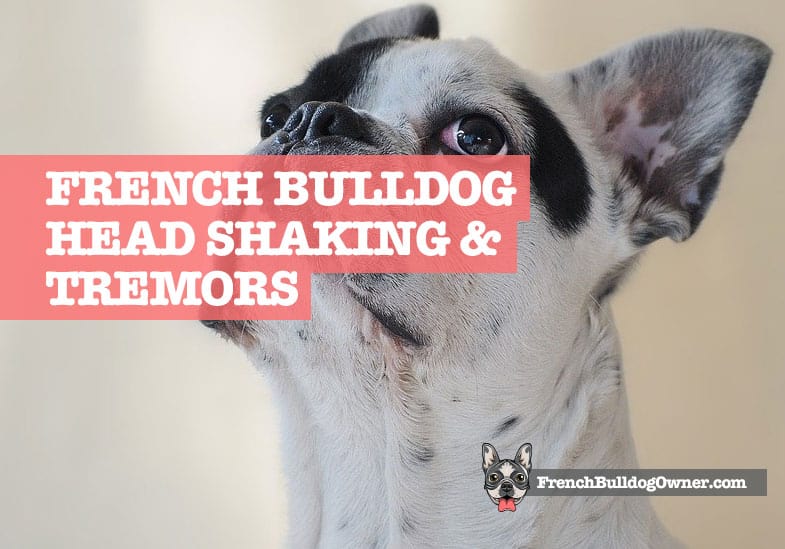 Seeing your Frenchie shaking his head or visible tremors can be a frightening experience. If you do see your French Bulldog shaking his head, please go and see your vet as it could be the sign of a serious illness. I’ve research Frenchie head tremors, and this guide am going to explain all I’ve learnt myself about what it could mean.

Before we start though I am going to split the two different problems apart to make things easier to understand:

The most common reasons your Frenchie will start shaking his head include:

Frenchies are very prone to ear infections. Their upright ears are a magnet for all sorts of gunk, so it’s important you clean them regularly.

The first sign of an ear problem will usually be them scratching their ears, followed by the head shaking.

Ear infections can develop quickly, being caused by:

Most Frenchies will shake their heads because their ears are bothering them. It’s their second-best way (after scratching) or trying to remove whatever is causing the issue.

However, Frenchie head shaking is completely normal, so you only need to worry when it starts to follow an unusual pattern – e.g. more shaking than usual and for longer periods of time.

Types of ear infections that lead to head shaking include:

Whilst Frenchies aren’t great swimmers, they can easily get water trapped in their ears. Those ears stand up erect and proud, rather than hanging down, giving rain an easy way in.

If you have bathed your Frenchie, there’s also a high possibility that he’s shaking his head to get rid of any excess water from his wash.

Try not to pour water directly onto your Frenchie’s head at bath time, instead washing from the neck down and wiping the head area with a wet cloth instead.

3. Foreign object in the ear

Whilst unlikely, foreign objects can become lodged in your Frenchie’s ear canal. A friend of ours has a toddler and a French Bulldog puppy. Her puppy started head shaking quite violently, with no discernible reason why.

She took her to the vets and a small piece of Lego was found deep in the ear. It was no wonder her dog was in discomfort. The culprit; her toddler had put it in there for a game.

If you can, use a torch and see if you can see anything trapped in there which your Frenchie is trying to shake out. It might even be an insect that has flown in.

An ear infection or water in the ear can both be easily treated. Water can be cleaned out, and infections can be treated at home or by your vet.

However, there are more serious conditions that could result in your Frenchie shaking his head. This could be related to a neurologic disorder, more likely classed as a head tremor which I will discuss next.

When to worry about head shaking

Most dogs will shake their head from time to time to get something out of their ear. They will also do it for something as insignificant as an itch. If you’ve ever seen your Frenchie violently shake his head when playing tug of war, you will know that same force can also be seen when they have an itchy ear.

When you see the shaking start, see if you can distract your Frenchie with a treat or toy. If you can and they stop, it’s probably a good sign that there’s nothing to worry about.

Head shaking only becomes a problem when it becomes regular. If you see repeated head shaking that doesn’t go away after a few hours, book a vet’s appointment.

Head tremors are an entirely different matter altogether. Head bobbing can point towards a serious health condition so it’s important to understand the difference between a tremor and a shake.

Watch the video below of an English Bulldog with head tremors (head bobbing). You will see how different this is compared to a wide shaking motion from side to side.

What cause French Bulldog head tremors?

The video above is courtesy of the excellent Vet4Bulldog website. On this vet’s website there is an excellent guide to Frenchie head tremors which I recommend you read. I’ve put some of the details in a more concise format below.

First, here’s a quote from their head vet:

“Head tremors and head shaking in bulldogs is usually intermittent and is usually considered harmless. The origin is mostly unknown (idiopathic) but in some cases, the thinking is that it might be a focal seizure, or a stretch mechanism localized to the head. Head shaking in bulldogs and French Bulldogs are usually short lasting though in some cases can last for a few minutes.”

However, there are some serious health conditions that can result in head tremors, including:

Frenchie head tremors could be idiopathic

However, a lot of the time there is no known reason for French Bulldog head tremors, and as the vet said, it could be completely idiopathic (meaning unknown). You can read more about it on Wikipedia.

This involuntary head movement has been compared to what we see in humans with Parkinson’s Disease, and is more common in middle aged to older Frenchies.

Here’s what I found out about this head tremor and shaking issue:

Vets advise that you don’t panic. Reacting in an over-excitable way could lead to your Frenchie feeling more stressed. They will already have a degree of stress, as they won’t know what’s going on – remain calm and put them at ease.

Disclaimer: Obviously, I am not a vet, but I do suggest that you visit yours at the first time of head tremors. Unfortunately, there is no known treatment for idiopathic head tremors, but it could be a different issue completely so will need checking out by a professional.

The knowledge and advice I’ve published in this guide to French Bulldog head shaking and tremors is based on what I’ve read in vet journals, vet websites, and vet’s YouTube videos.

Please make sure you take your Frenchie to your own vet if their head shaking is more than usual, as a quick diagnosis could soon fix up any ear irritation. Cones will often be fitted to your Frenchie whilst they recover to stop them from getting at their ears.

Diagnosis is even more important if the head tremors and shaking are due to a more serious health condition. If not treated, prolonged head shaking can then lead to secondary issues such as ruptured blood vessels in the ear.