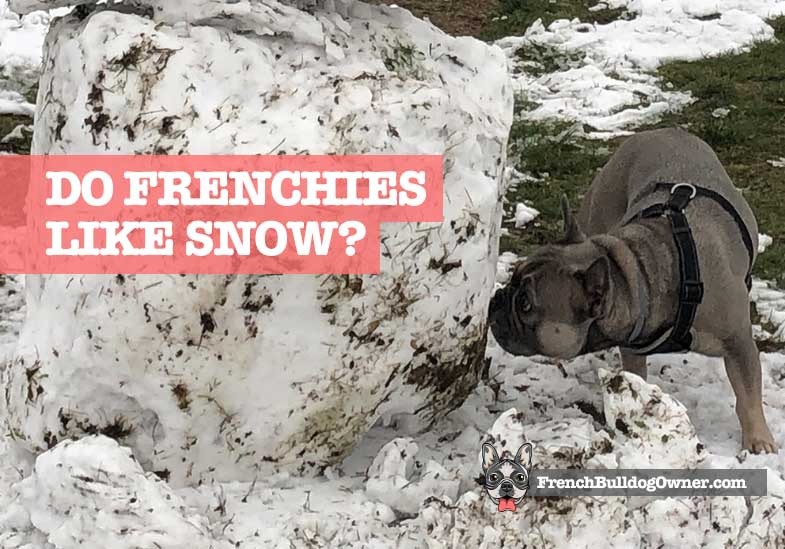 Over the last couple of mornings walking Claude, it’s been really noticeable how the weather has started to turn. It’s starting to get a lot colder and I think snow isn’t that far off. Our French Bulldog loves snow as you can see from the video further down the page. But, when it does start snowing, there will be a few things you need to be cautious of with your Frenchie.

Do French Bulldogs like snow? Frenchies love playing in snow, especially if they have never seen it before. They tend to run around and roll in snow. However, you do need to be careful as French Bulldogs are more susceptible to hypothermia due to their brachycephalic genetics, plus their short coats. There can also be some dangers when eating snow.

The bottom line is this; your Frenchie will like snow, but you need to exercise just a little bit of caution.

These dogs aren’t designed to live outdoors (read more) and you will need to take extra special care to ensure the snow doesn’t lead to any health problems. You can read more about the risks and what to further down the page.

Below you can see some short video footage from the first time that Claude the French Bulldog saw snow for the first time. As you can see, he absolutely loved the strange sensation of cold snow under his paws.

If you Google anything to do with dogs and snow you will see thousands of videos of puppies frolicking in the white stuff. There are thousands of blogs relating to whether dogs like snow – in fact, when I Googled’ “do dogs like snow” I saw that the search engine had 190 million results!

It’s a fact; dogs love snow, and French Bulldogs are no different.

But why is this? Is there a scientific explanation, or just anecdotal evidence?

Whilst I can’t find any research or studies to back up why dogs seems to love playing in snow so much, I did find an interesting article on the Scientific American website.

They interviewed a number of experts to get some opinions on why this might be. Here’s a selection of the best comments.

“I think it relates to the sensory qualities of snow and the bracing effects of cold weather. I think when watching dogs, for example, in snow we are not too far off in comparing their activity to that which we experienced as young children ourselves.” – Gordon M. Burghardt, PhD, University of Tennessee.

“There is a pleasure in a changed landscape, a topography re-shaped by fallen snow. Dogs like the ‘new’, of course, and what could be newer than their entire world covered with this icy blanket. Smell is changed, too, and we can for a moment see some of the otherwise invisible markings (like tracks or urine) which are so engaging for dogs.” – Alexandra Horowitz, PhD, Barnard College.

“I suspect that part of the answer lies in how quickly dogs habituate to objects that they play with. Snow changes the sensory characteristics of everything it touches—visual appearance, obviously, but also, and perhaps more importantly, scent. Thus, snow has the potential to renew a dog’s interest in its (over-?) familiar surroundings, and switch on exploratory behaviour.” John Bradshaw, PhD, University of Bristol.

“Dogs like snow because it is cool and different. Snow changes everything: what a dog sees, smells, hears and feels as it runs through the snow. Knee-deep snow is up to a dog’s chin. When I watch dogs run and play in snow, it reminds me of kids in a ball pit, diving in and burrowing and having a blast.” Stephen Zawistowski, PhD, Certified Applied Animal Behaviorist.

There are some common themes recurring here for why a French Bulldog might like snow. Here’s a bulleted list of what appear to be the main reasons in absence of any hard scientific proof.

In my video Claude playing in the snow you can see a lot of this being acted out.

Notice how he rolls around in the snow for 40 seconds. It must be really weird for our Frenchie to feel the coldness on his back and feel all those different sensations on his paws.

You can also see him sniffing at a snowman that some children have made. There’s a part I didn’t capture on video where he was also sniffing at another dog’s urine trail that had been left in the snow.

To conclude, French Bulldogs do like snow. They will love to play with it as it’s something that are not used to, and it will move differently to how the ground usually does.

However, all of this fun and excitement does come with a caveat; the dangers of cold weather to a Frenchie.

Handy Hint: I’ve previously written a larger guide on how to take care of your French Bulldog in cold weather. Read that for hints and tips on how to make sure they stay warm and safe.

The dangers to French Bulldogs from snow

Whilst it’s great fun to see your French Bulldog playing in snow, you need to be aware of the dangers that it could present. Your beloved pup could be at risk of frostbite and hypothermia.

I recently created an infographic which I would recommend all Frenchie owners print off when the winter snow comes. It tells you whether or not the weather is too cold for them. You can see that below.

Why is snow potentially harmful to French Bulldogs?

Whilst snow itself isn’t a harmful factor for Frenchies, the cold weather that comes with it most certainly can be. Like us, you won’t want to stop your French Bulldog from running and playing in snow, but just be cautious, and here’s why.

1. Dogs can get sick from eating snow

The reason why is probably not what you’re thinking. Snow in itself isn’t that harmful for a French Bulldog to eat, though it will lower their temperature so be cautious. I believe the bigger danger is what could be in the snow. There are potential health hazards.

Snow can hide a number of elements that can make your dog sick. For example, there could be the faeces of another animal in there, there could be gritting salt or chemicals. Snow is a great hiding place for many things and you never know what’s under the snow your dog is eating.

2. Ticks and fleas can still be present in cold weather

You might think that when it snows you can stop the flea and tick prevention. Don’t make this mistake.

Whilst snow and cold will kill these pest types, they could still be around. Ticks and fleas will want to seek out warmth, and your Frenchie’s body is the perfect warm place for them to seek shelter in – and these critters will then hitch a ride back to your warm home.

3. Make sure you brush all the snow away from their coat

After your Frenchie has played in the snow, there will be snow stuck to the fur. Please don’t leave it stuck on there and make sure you towel them down when you get home.

This serves two purposes; firstly it means the snow won’t melt and bring their temperature down. Secondly, it will stop your Frenchie from pawing and scratching at himself to remove the snow chunks. This behaviour can damage their skin that could already be dried out due to the cold weather.

And as a last precaution, you should remove the snow in case it has any salt or antifreeze in it. If your Frenchie licks this snow off themselves they could become very sick.

4. Frenchies can get frostbite and hypothermia from the snow

The cold weather that comes with snow is by far the biggest danger. I’ve put together a guide to Frenchies in cold weather that goes into a lot more detail including what to do, how to handle it, and the best ways to care for your Frenchie when the weather takes a turn for the worse. You can read that here.

If you want to prepare your French Bulldog for the snow then I do recommend a few clothing accessories including winter boots and a winter coat. You can see links below to where I’ve reviewed and rated the best.

When you see your French Bulldog running around and digging in the snow, it’s most likely entirely down to them having a whole load of fun.

Frenchies love the snow and it can be a great experience for them. Just be very aware of when it might be getting too cold for them – the infographic further up the page offers you a good yard stick to go by when it’s snowing.