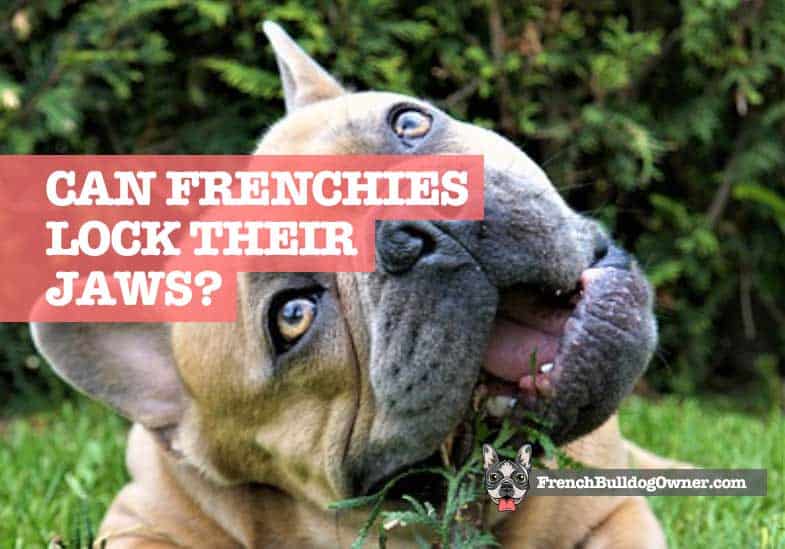 Frenchies are generally a non-aggressive breed (although there will always be exceptions to the rule), but can give a nasty nip, even if unintentionally during play. How strong their jaws are and whether or not they can clamp down with a locking jaw will rightly be a concern for any prospective owners.

In this short guide I wanted to put some the myths around French Bulldogs having locking jaws to the test, so you know what you’re letting yourself in for.

However, I want to make a distinction between locking jaws and “lockjaw”. French Bulldog lockjaw is another term for a muscle spasm that can result due to the tetanus disease. I will describe that towards the end of this guide.

No dog breed can physically lock their jaw which is the action of them “locking” both the top and bottom jaw bones and teeth together. It also doesn’t make sense from a scientific and evolution perspective. If dogs were able to lock their jaws then it could be hazardous to them to not be able to let their jaw grip go if their prey was fighting back and doing the dog damage.

Yes, some dogs do have a strong bite, and some will not want to let go – but the whole jaw locking scenario is a complete myth. And that’s backed up by research.

Several well-regarded experts have conducted research and published studies into dogs locking their jaws. For example, Dr Lehr Brisbin of University of Georgia said this about pit bulls, one of the breeds most commonly associated with locking jaw myths:

“The few studies that have been conducted of the structure of the skulls, mandibles and teeth of pit bulls show that, in proportion to their size, their jaw structure and thus its inferred functional morphology, is no different than that of any breed of dog. There is absolutely no evidence for the existence of any kind of locking mechanism”

What the doctor is saying here is that there was no evidence that pit bulls or any other dog breed are able to lock their jaws. The same assumption should therefore be applied to French Bulldogs.

The results of my own test into French Bulldog jaw strength

I wanted to test the theory for myself so decided to play one of Claude’s favorite games; tug of war. He won’t want to let go of that rope ever… and will do his best to lock his jaws in place so there’s only ever one winner.

Whilst our French Bulldog jaws are very strong, everyone in my whole family is able to prise his jaws off the rope.

In fact, my son who is 6 years old is even able to pin Claude and open his jaws up to get a toy out if our Frenchie tries to chew it. I’ve described that in more detail below.

Do French Bulldogs have strong jaws?

Frenchies have strong enough jaws to give you a great game of tug of war. However, they don’t have enough strength in their jaws to not let you prise them open if need be.

To give you an example, my son loves playing with Lego. Unfortunately, our Frenchie loves Lego too. If there are any Lego pieces left on the floor, Claude the Frenchie will chew on them.

When he gets a small piece of plastic like this in his mouth, we will have to prise his jaws and teeth apart to fish the toy out.

It’s not hard to do, and so based on that I can categorically say the French Bulldogs do not have strong jaws. At least, not strong enough that you cannot get them off you or opened if need be.

What is a French Bulldog’s jaw strength?

I would estimate that the jaw strength of a French Bulldog is anywhere between 180 and 230 pounds per square inch.

In simple terms, should a Frenchie clamp his jaws on you, you will be able to shake him off and he won’t be able to stick on and tear at your flesh like an aggressive dog breed could.

Handy Hint: You can see how I tried to calculate what the pound per square inch strength was of a Frenchie’s bite in a previous post. You can see what I found in my article on bite force strength.

What about French Bulldog “lockjaw”?

Remember earlier when I wanted to make the distinction between a French Bulldogs being able to lock their jaws (they can’t) and something else called “lockjaw”? Well, here’s what lockjaw actually is – it’s a health condition rather than an aggressive act.

French Bulldogs can have the lockjaw condition when they are infected with tetanus. This results from a bacterial infection named clostridium tetani (see definition).

It can lead to involuntary muscle spasms if your French Bulldog’s jaws. Frenchies affected with it can have a lot of trouble opening their mouths as their jaw muscles will stiffen up.

It’s not a particularly common disease and it’s very unlikely your French Bulldog will have lockjaw (or clostridium tetani). The symptoms to look out for (according to PetMD.com) include:

Whilst the tetanus lockjaw condition is thankfully rare, there are some other jaw health problems that Frenchie owners have reported on forums and social media. I’ve tried to answer a few of these below.

My French Bulldog’s jaw is chattering and quivering

Some Frenchies will have chattering jaws when they are excited, afraid, or even cold (just like us humans). However, if you see prolonged jaw quivering you should call a vet immediately.

It could be the sign of something more serious such as:

My French Bulldog’s jaw is clicking

A clicking jaw (it might also sound like a popping or cracking sound) it could mean your Frenchie has:

My French Bulldog has a swollen jaw

There are many things can that can lead to swollen jaws. This type of facial swelling could be due to:

And finally, according to the clubs that judge the Frenchie breed, here’s what the jaw structure should be like in pure breeds.

One of the considerations when getting a dog is how aggressive they might be. A concern you might have had is what if a French Bulldog was to have locking jaws.

The bottom line is this; Frenchies are renowned as being non-aggressive. There will always be some who are, but generally they are very placid.

If you do have concerns about the strength of your French Bulldog’s jaws and how hard they are biting, there are ways in which you can curb this behavior. I’ve written a guide below to help you: