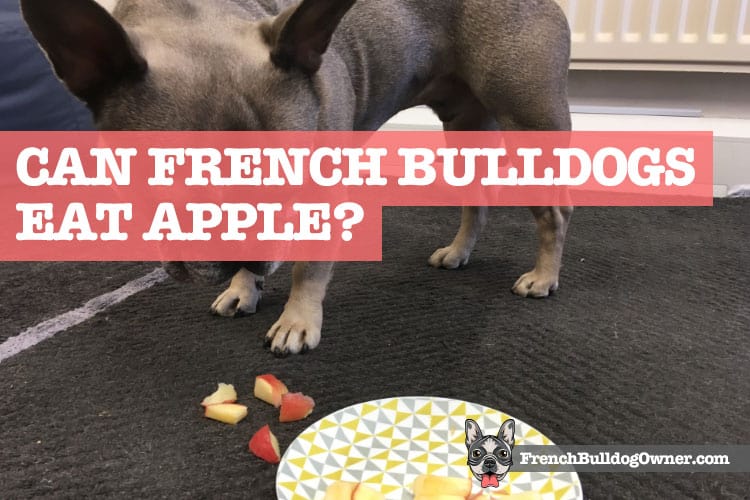 When we’re in our kitchen, Claude the Frenchie is constantly on the lookout to scrounge for anything that drops on the floor. We’re massive fans of fruit, and my son eats apples every day. It’s not uncommon for him to let our French Bulldog have a slice of his apple as a small snack.

But I did have to double check if it’s ok for French bulldogs to eat apple, whether it was safe, and if there are any concerns over pips, seeds, and the core. Here’s what we found out.

Can French Bulldogs eat apples? French Bulldogs can eat apples safely but make sure you remove the pips, seeds, and core as these can cause upset stomachs. Apple contains vitamins A and C, so can be of a health benefit, but should not be fed to Frenchie puppies as their digestive system may not react to apple very well.

Are apples good for a French Bulldog?

In short, yes, they can be, but moderation is key to maintain the health condition of your dog.

Apples contain a lot of vitamin A, C, and K so can help prevent bone disease and boost your Frenchie’s immune system, plus have benefits for their skin.

I spoke to my vet about feeding our Frenchie apple, and here’s what he said:

“Small amounts of apple can be ok for a dog due to the fiber and vitamins. But try to limit it to just a few times a week, and small portions only. There are natural sugars in fruit, so too much can be a bad thing. Apples can also help keep your Frenchie’s teeth clean, and it might even improve the smell of his breath.”

For healthy adult Frenchies, a small amount of apple a couple of times a week should pose no risk, providing you remove the pips and core and prepare it correctly.

Watch the video below to see a clip of me feeding our Frenchie some apple, and how I prepared it first to be completely safe.

All dogs are individuals though

Just like with any other fruit, apples contain natural sugars so can be harmful to dogs with diabetes where their sugar intake needs to be regulated.

Whilst our dog Claude has been absolutely fine with a little apple each week, it doesn’t mean your dog will be.

You should talk to your vet and take into account any pre-existing or potential health problem they may have before taking any risks with the food you let them eat.

The possible side effects of apple

Even if you are careful, there is no guarantee that your Frenchie won’t react badly to eating an apple.

As with any new food you introduce to your dog’s diet, do it very slowly at first to make sure they don’t get an upset stomach and become ill.

If your Frenchie experiences any form of vomiting or diarrhoea, give them some fresh water immediately, and if not resolved in 24 hours, consult with your vet.

This is where I would draw the line; Frenchie puppies are notorious for having stomach problems when they are younger. They have very delicate digestive systems so it’s key to keeping their diet basic, with the correct puppy food.

When we first got Claude as a puppy it was a struggle to stop him eating anything that he came across outdoors, and he would be sick a lot of the time.

Vomiting is not unusual itself at a puppy age, but you can help to reduce this by being very strict with the puppy’s diet.

You can read more about how much should be in a French bulldog puppy diet elsewhere on the website.

How to prepare apple for a Frenchie

Before you even think about feeding your French Bulldog apples, make sure you cut the core out and remove any pips and seeds.

Slice the apple into small bite-size chunks and test him on one cube first. If he reacts ok to it, then you can let him have some more.

But please limit the amount of apple to just a few small cubes and treat it the same way as you would a doggy treat. In other words, less is more.

From the research I’ve done, there is no difference in green or red apples, and the directions in this guide are exactly the same.

You could even mix things up a bit, and simply feed them as a small slice of raw apple like I did in the video, or even as cooked apple. Cooked apple will be softer and easier to chew, particularly for an older Frenchie.

On a hot summer’s day, we have even frozen the small apple cubes in the past, as this provides a cooling snack for Claude – you can see another example of how we do that when we discussed feeding a Frenchie watermelon in a previous guide.

Reasons to remove the core and pips

Apple seeds contain a small amount of cyanide which is released when the pips are chewed. It can build up in your dog’s body over time and could lead to health problems.

Don’t be worried though. If your Frenchie does eat an apple core and pips, chances are he will be absolutely fine as long as you don’t let him do this again or regularly.

Cyanide in apple pips needs to be ingested at a very large scale to create a health problem, but it’s still worth avoiding.

The more likely danger to your Frenchie will be from choking on the core or from a seed getting trapped somewhere in their digestive system.

Can Frenchies eat apple every day?

You probably remember the old saying from childhood:

“An apple a day keeps the doctor away.”

As with most “human” foods, I don’t recommend feeding your Frenchie apples every day. Instead consider it like a treat to be fed to them in moderation, perhaps no more than a few slices a couple of times a week.

What about other apple-based foods?

But what about other foods that contain apple, and how safe are they to feed to your French Bulldog? Here’s a list of popular recipes that include green or red apples, and whether or not they are suitable

The way we introduce new foods into Claude’s diet is to think of him like we would a toddler. In other words, take it slow, and only give your dog small amounts at first so you can react to any situation that may arise.

French Bulldogs cannot eat apple core or apple pips, and I don’t recommend you let a Frenchie puppy have any apple at all.

To conclude, there’s no reason why a small amount of apple a couple of times a week can’t be a great source of additional fiber and vitamins for your dog.

Handy Hint: I’ve developed a guide to all the fruits that French Bulldogs can eat. You can download a printable version to pin on your refrigerator.