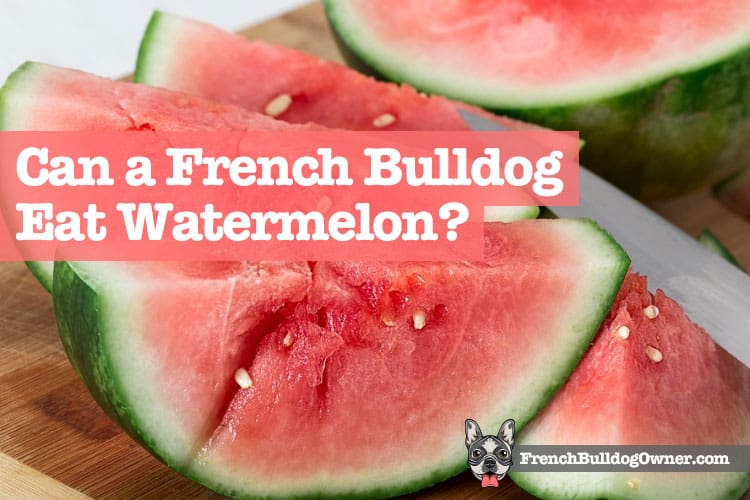 My family and I were recently playing outside on a hot sunny day with our Frenchie. He got really hot (as they tend to do), so we brought him into the shade for a while. We gave him some water, but also wanted to know if it was safe for our French Bulldog to eat watermelon to cool down. Here’s what we found out after doing some research.

Is watermelon good and safe for a French Bulldog?

Watermelon and cantaloupe are one of those super foods that all dieticians recommend we eat as part of a healthy diet. But what about our beloved Frenchies? Is it good for them, can we feed them watermelon, and more importantly; is it safe?

Watermelon and cantaloupe are safe for a French Bulldog to eat as long as you take out the rind and seeds. Watermelon includes essential nutrition, calcium, potassium, plus vitamins A, C, B6, and B1 but in small doses.

With watermelon being 92% water, it can also be a great way to help keep your Frenchie hydrated on a hot day, or after any heavy physical overexertion. Strawberries are also a great idea – read more here.

In fact, in the video below you can see my son and Claude playing with a water pistol out in the sun. Claude was really worn out and hot afterwards, so we gave him a small amount of watermelon to help cool him down.  You can’t see him eating the watermelon in the video, but you can see the fun and exertion that led up to him appreciating this refreshing treat.

Watermelon contains no fat or cholesterol

Watermelon also contains zero cholesterol or fat, so is safe for a French Bulldog to eat, with no concerns for the owner over long-term health issues.

However, the rinds, skin, and seeds can present a problem.

Let’s get into the risks in a little more detail, with reasons not to feed your Frenchie certain parts of a watermelon, unless you prepare it correctly.

Are watermelon seeds dangerous for a French Bulldog?

French Bulldogs can eat watermelon seeds, but it is not advisable that you let them do so. Seeds can cause gastrointestinal problems, are hard for them to digest, and can lead to blocks in their intestines, diarrhoea and upset stomachs.

If you are going to prepare watermelon for your dog, you can read how to do so lower down the page.

The bottom line is; remove the seeds before letting your Frenchie eat it.

Can dogs eat watermelon rind and is it poisonous?

I also don’t recommend that you let your Frenchie eat the rind or skin of a watermelon. Just like the seeds, the skin and rind can also cause gastrointestinal upsets.

Your dog might want to chew the rind, but don’t even give him the opportunity to.

This is what our vet said about the matter:

“Watermelon is not poisonous to a dog, but the skin and rind can be very hard for them to chew and digest. Don’t worry if he has eaten the rind, as chances are he will be fine, but avoid it so not to tempt fate and increase the chance of risk regarding illness and internal blockages.”

How much watermelon can a French Bulldog eat?

Just like any food, too much of one thing can be a bad idea. I have written extensively about this before (for example, eggs are good for a Frenchie, but not in excess).

So, can too much watermelon harm your Frenchie?

To get the right answer on this, I actually spoke to Claude’s vet last time he went in for a check-up. Here’s what our vet said:

“Watermelon contains a high number of vitamins in it, such as Vitamin A, B6 and C. This is good, but only in small amounts as a hydrating and cooling snack. View it as a treat, not a staple food. I don’t recommend that any dog has more than 10% of their daily calories in the forms of snacks, and I consider watermelon to be a treat like this.”

OK, so there’s the professional answer. But what does that actually mean in reality?

If you consider that the average French Bulldog weighs around 25 pounds, then his daily calorie intake should be no more than 25 to 30 calories per pound in body weight.

Vets also recommend that fruit and vegetables should not exceed 20% of a dog’s daily diet.

Based on those guideline numbers, don’t exceed 750 calories in total food a day. With watermelon being both a snack and fruit, range the intake between 10% and 20% on the day.

There are 30 calories in 100 grams of watermelon it should not exceed 75 to 150 calories daily. I prefer to stick to the safe side of things, so let’s limit it to 75 calories a day.

That will equate to a watermelon intake of 250 grams at a maximum – but not every day like our vet said.

Handy Hint: Want to know what other fruits are okay for a French Bulldog to eat? Click here and download the list with 39 fruits ranked and rated for safety.

Which part of the watermelon is safe for a Frenchie?

Let’s just recap on what parts of a watermelon or cantaloupe will be safe for your French Bulldog to eat.

How to prepare watermelon for your Frenchie

Now that we’ve established that it is safe (and even healthy) for a French Bulldog to eat watermelon or cantaloupe, how should you prepare it for them?

Here’s what we do when we let Claude eat it.

You also might want to consider making your Frenchie some refreshingly frozen watermelon for a really hot day.

Frenchie are prone to overheating, so this can be a great way to help bring their temperature down with a tasty and (relatively) healthy snack.

All you do is freeze the small cube blocks you prepared earlier and bring them out of the freezer when required. My young son loves this snack too, so it’s a win on both counts!

Who doesn’t eat loving watermelon on a hot summer’s day?

I know I do, as do my whole family, Claude the Frenchie included!

It’s now a staple part of any picnic we might have during the summer, and we also make sure to bring along a separate plastic container to put Claude’s cubed portions in.

However, the watermelon cubes have the rind and seeds completely removed beforehand.

So, next time you have a hot summer’s day and want to give your Frenchie a nice refreshing and cool snack, don’t be afraid to reach for the watermelon or cantaloupe.

It will make a healthy (in small doses), refreshing, and hydrating treat that he will absolutely love!