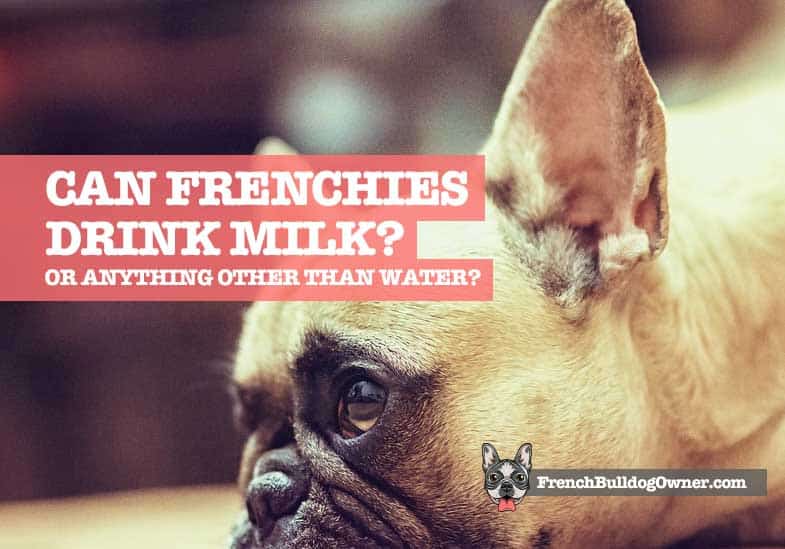 Whilst humans love to drink a variety of beverages and tastes, you need to be more careful with what your French Bulldog drinks. Frenchies love to taste anything and everything they come across, but that doesn’t necessarily mean it will be good for them.

In this guide I am going to explain whether French Bulldogs can drink milk, tea, orange juice, fruit juices, and a range of beverages so you know what’s safe and what’s not.

Can French Bulldog puppies drink milk? French Bulldogs should not drink milk. Whilst it is a good source of calcium for their growing bodies, many dogs are lactose intolerant and can get upset stomachs from dairy products, including cow’s milk and goat’s milk. However, there are specialist milks you can buy that Frenchie puppies can drink.

Why drinking milk can be bad for Frenchies

Back in the day many owners used to let their dog’s drink milk. It made sense in some ways, as calcium deficiency can lead to poor growth, weakness, and bone and joint problems.

Don’t panic though. If you have let your Frenchie puppy drink milk, chances are he will be fine. After all, young puppies have enzymes that enable them to properly digest lactose so in most cases, they won’t be sick.

I still wouldn’t recommend it though; if a Frenchie puppy starts off drinking milk and loves the taste, you then won’t have to spend time taking it out of their diet as they get older.

With older French Bulldogs, they start to lose this ability to digest lactose as adults, becoming lactose intolerant.

Based on that, I would never recommend letting a French Bulldog drink milk, puppies or adults. This is backed up by the Banfield Pet Hospital who say you should not let puppies drink cow’s milk at all (see source). The WebMD website also recommend avoiding human milk replacement products (see source).

Will my Frenchie get enough calcium without milk?

Calcium and protein are a staple part of high-quality dog foods. Providing you are feeding your French Bulldog the best food available (we like to use the Canin French Bulldog food), then he won’t be missing out on nutrients.

French Bulldog puppies will drink their mother’s milk until they are weaned. In most cases, Frenchies will be weaned off milk at 7 weeks of age and will leave to go to their forever home from around 8 weeks and up.

Does that mean I can’t let my Frenchie drink milk at all?

The lactose intolerance of some dogs means milk isn’t a great. It’s not going to kill them, and a little milk as a treat could be something that they love with no ill effects.

Alternatively, it could cause an upset stomach. Unless your vet has tested your Frenchie, you won’t know if they are lactose intolerant or not.

French Bulldogs can drink milk alternatives though, and there are many commercially developed products that are suitable for dogs.

Most are sold as powdered milk products designed for dogs. I would also ask your vet first for what they recommend. This is particularly important for puppies as you want a milk substitute that offers enough nutritional value without cause gastrointestinal upsets.

What about drinks other than water?

Hands down, the best drink you can give your French Bulldog is water. The only real exception to this rule would be a chicken-flavored broth, which is a great drink to let your Frenchie have to help recover from an illness.

Your French Bulldog can drink clean and fresh water for their entire lifetime. They won’t get bored of it and it will keep them healthy and hydrated. Just don’t let them drink water from a toilet bowl – it will contain lots of nasty bacteria.

Handy Hint: If you’re worried your Frenchie isn’t drinking enough water or perhaps is drinking too much, read this guide to what their daily water intake should be.

But what about French Bulldog drinks other than water? What’s safe to drink and when should you worry?

Here’s a quick overview of some of the most common drinks your Frenchie might come into contact with and what you should know.

Goat’s milk has been trending in recent years as a great drink for dogs. Some say it can help with allergies, digestion, and overall health. However, there is no scientific proof to back this up (see source).

French Bulldogs can drink goat’s milk, but only ever let them drink small amounts of pasteurized. I would also recommend that you don’t give it to an overweight Frenchie due to the high calorie count.

To conclude, Frenchies should be ok with goat’s milk but don’t be convinced by the blogs that tell you it’s a super drink with loads of benefits. There is no research to back this up.

You would think that almond milk would be a good drink for a French Bulldog given it contains no dairy; therefore, the lactose intolerance issues goes out of the window.

The health benefits of drinking almond milk include plenty of the B3 vitamin which helps with liver, eyes, skin, and fur. There’s also vitamin E in there which helps the immune system, plus calcium, magnesium, and phosphorous for healthy bones.

So yes, it can be healthy for your Frenchie but only if it’s the right kind of almond milk. Some products can also contain xylitol which is toxic to dogs and most off the shelf almond milk with have anything as low as 2% almonds.

However, just like the goat’s milk, almond milk is highly calorific with lots of fat. Based on that, French Bulldogs can drink almond milk but only as a very occasional treat, and only almond milk that contains no fillers, sugars, and a high level of almonds.

French Bulldogs can drink soy milk in moderation. Soy contains lots of proteins so can be good for them. However, soy is a highly allergenic food to many dogs, so the risk far outweighs the benefits. There are also lots of calories in soy milk which aren’t going to be great for weight control.

Unless you are 100% confident your Frenchie isn’t diabetic, overweight, or will possibly have an allergic reaction to soy, I would avoid letting them drink it.

French Bulldogs can drink small amounts of coconut milk as it’s not toxic to them and is mainly made up of natural waters. Scientists have found that coconut milk or water is good for a canine immune system.

However, whether Frenchies should drink coconut milk is another matter. It is a very creamy drink that can upset delicate French Bulldog stomachs so should be either avoided completely or just be given as a rare treat.

French Bulldogs can drink very small amounts of orange juice and other fruits, but it’s not recommended that you pour it out for them. Frenchie digestive systems are very delicate and cannot process certain drinks like humans can.

Whilst fruit juices are not toxic to dogs (as long as no seeds are present), they can play havoc with their digestive systems if drunk in the concentrated form you might take out of your fridge.

However, there are many fruits that are safe for Frenchies to eat which will come with their own natural juices. I’ve developed a downloadable list of safe fruits for Frenchies. If your puppy eats any of those fruits, they will of course be drinking the juices.

In small amounts it will be fine, but you should gauge their reaction with a small amount of juice first, and not make it a staple part of their diet.

The considerations you should always take are:

To conclude, French Bulldogs can drink small amounts of juice, but only let them drink it if it’s in the form of a small piece of fruit as an occasional treat.

Whilst you and I might love to have a coffee to get us going in the morning, or a refreshing cup of tea in the afternoon, it’s madness to let French Bulldog drink these beverages.

Coffee and tea have high levels of caffeine which is extremely toxic to dogs.

French Bulldogs should never drink coffee or tea as caffeine can poison them to a potentially fatal level. Here’s what the Pet Poison Helpline say:

“Pets are more sensitive to the effects of caffeine than people are. While 1 or 2 sips of coffee or tea will not contain enough caffeine to cause poisoning in most pets, the ingestion of moderate amounts of coffee grounds or tea bags can easily cause death in small dogs.” (see source)

If your Frenchie has drunk coffee or eaten a caffeine-based product, please consult with your vet immediately. Signs of caffeine poisoning include:

Handy Hint: Did you also know that chocolate can be extremely toxic to dogs? Just like caffeine it can poison them. Read this guide telling you when to worry if your Frenchie has eaten chocolate.

I almost can’t believe I have to write this next piece of advice as most Frenchie owners would surely have the common sense to realise this isn’t a good idea.

But there are always those dog owners who think that it’s funny to let their French Bulldog drink alcohol and beer, particularly around Christmas time.

You might hear them saying; “what’s the harm, it’s only a little sip?”

The bottom line is that, yes, dogs can get drunk. They only need a small amount of alcohol to get seriously impaired. There’s also the risk of ethanol toxicosis – alcohol poisoning in other words.

French Bulldogs cannot and should not drink alcohol. It’s deadly dangerous, irresponsible, and not funny in any right-minded person’s opinion.

Can French Bulldog’s drink anything other than water?

Whilst my guide isn’t completely exhaustive, I hope you get the general idea now that French Bulldogs can drink other things aside from water, but it’s not actually necessary for them to do so.

A well looked after Frenchie will get all they need from a responsible diet and just plain old boring water to drink.

If you’re in any doubt whatsoever and want to be completely in the clear and not take any risks, just give your French Bulldog water to drink.

To conclude, French Bulldogs can drink milk, and Frenchie puppies even more so. But, it’s not necessary, it’s not recommended, and could upset their stomachs. You run the risk of allergies, sickness, and possibly death in more serious cases.

In my personal opinion, it’s not worth letting your Frenchie drink anything other than water.  There’s simply no substitute for it that you need to consider.

I am one of Claude the French Bulldog's human parents. I write about all the things I've learned about owning a Frenchie, the adventures we have, and any advice and tips I've picked up along the way. Read more about Marc Aaron.

link to Are French Bulldogs Good Off the Leash? (Train to Walk Without a Leash)

Frenchies are renowned for their stubborn behaviour, so it’s only natural to question how good they are off the leash. There’s also the consideration of whether you can teach them to walk without...

French Bulldogs don’t need as much exercise as the majority of breeds, but they do still need to be kept active. Our Frenchie Claude loves getting out and about, so we go for walks twice a day....