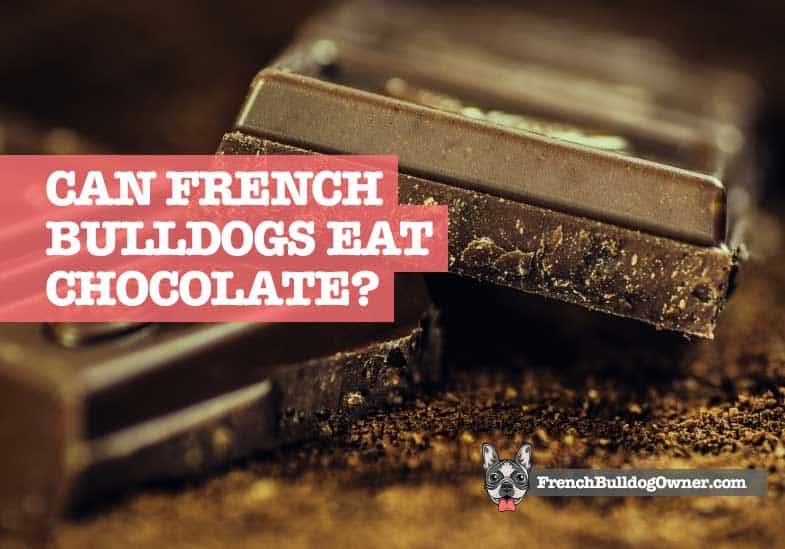 If there’s one thing you need to know about Frenchies and human food then it’s how dangerous, toxic, and poisonous chocolate can be for dogs. Below you can read all about why and what happens, including some personal experience when our own Claude managed to eat some chocolate cake.

Is chocolate poisonous and toxic for dogs?

In large quantities, chocolate is poisonous for dogs.

It contains not just caffeine which can speed up their heart rate, but also a toxic component called theobromine. Dogs cannot process theobromine effectively, meaning it gets to dangerously high levels in their body and can also affect their nervous system.

How dangerous is chocolate to a French Bulldog?

If large amounts of chocolate are eaten (I explain how much is too much further down the page) then the worst-case scenario can be fatal.

What happens when a French Bulldog eats chocolate?

Just a small amount of chocolate can give your French Bulldog an upset stomach. You might find them vomiting and retching, plus has diarrhoea to contend with.

After a few days they should recover.

However, with large amounts of chocolate, particularly dark chocolates with higher concentrations of theobromine, you will see more serious symptoms of poisoning.

You can read those symptoms lower down the page.

How much is too much?

Should you be worried if your Frenchie has eaten a small amount of chocolate? Should you immediately rush them to the vets? And how much chocolate can they eat safely?

Larger dogs are able to consume bigger amounts of chocolate before they get sick. But French Bulldogs are a small breed, so cannot eat as much without feeling some form of ill effects.

It’s also down to the type of chocolate that they eat. Some chocolates will have higher concentrations of the toxic component theobromine in them.

Let’s say you are eating a chocolate bar and some crumbs fall on the floor that your Frenchie licks up, he’s probably going to be absolutely fine.

However, if it’s a chunk of chocolate, particularly dark chocolate, then you might find he gets a little poorly. The signs to look out for would be vomiting, diarrhoea, and a lack of appetite.

But if he was to wolf down an entire chocolate bar, that’s when you probably should consult with your vet as the levels of theobromine will be higher.

Did You Know? Due to the high amount of theobromine in dark chocolate, just a small amount can be very toxic to a Frenchie. 25 grams (around half a chocolate bar) would be enough to poison a French Bulldog weighing 20 kg.

When you should call the vet

If your Frenchie has eaten just small amounts of chocolate, let’s say some crumbs or a chunk from your chocolate bar, then he’s probably going to be fine.

He might be a little sick, but providing you take the steps I outline in my personal experience a little lower down the page, it’s probably not due a trip to the vets.

If your French Bulldog has eaten a large amount of chocolate, then he could end up with severe theobromine poisoning.

I read on a forum about a poor woman whose dog managed to get to a box of chocolates kept under a Christmas tree. This happened overnight whilst the owner was asleep, and she didn’t know until the morning.

It was too late at that point, and the dog had passed away.

However, if you do know that your Frenchie has eaten a large amount of chocolate you should contact your vet immediately.

Symptoms of theobromine poisoning in dogs

The signs of theobromine poisoning will occur between 4 and 24 hours after eating chocolate and include:

The bottom line is this; if you have a small dog like a Frenchie and they have eaten a large amount of chocolate, go to the vets. With dark chocolate, even if it’s just a small amount, exercise caution and still talk with a professional.

Getting effective and timely treatment is very important.

Handy Hint: Chocolate isn’t the only poisonous food for a Frenchie. I’ve compiled a list of the most dangerous human foods you should never feed your dog.

Calculate whether your dog needs to go to the vet

The Vets-Now website has a calculator which lets you enter in the weight of your dog, the type of chocolate they ate, and what type of chocolate it was. It then gives you some advice on whether you should call a vet or not. Take a look at the dog toxicity calculator.

If you do have to go to the vets, please be aware that there is no antidote to theobromine. Here’s what Vets-Now.com say:

“In most cases, your vet will make your dog vomit. They may wash out the stomach and feed activated charcoal which will absorb any theobromine left in the intestine. Other treatments will depend on the signs your dog is showing. They may also need intravenous fluids (a drip), medication to control heart rate, blood pressure and seizure activity. With prompt intervention and treatment, the prognosis for a poisoned dog is usually good — even in those who have eaten large amounts.”

One summer we were in our garden with friends having a birthday party for our 4-year-old son. One of the other kids dropped a big chunk of chocolate cake on the decking. I didn’t realise it had happened until I heard the kids laughing.

I came on over to the table to see our Frenchie Claude with chocolate cake all over his mouth. He had wolfed down the cake in seconds.

Obviously, the kids at the party were very young and didn’t know that chocolate was toxic to dogs.

I wasn’t entirely sure how much cake he had eaten. It wasn’t dark chocolate but had lots of white and milk chocolate in it.

Because of that I wasn’t worried as much as I might have been.

Our vet told us to keep a close eye on Claude, and that evening he did actually vomit.

Over the following three days he was completely off his food and vomited about 5 times. It was like he was trying to get the toxicity out of his body.

After 3 days he started to get his appetite back, and we switched his diet to chicken a rice. Food like this is great for a poorly Frenchie as it will help to settle their stomach.

Can you buy special dog chocolate?

Yes, you can! But I would still suggest that you let them have it in moderation and only as a special treat.

It was Claude’s birthday recently and we bought him a special dog birthday cake which had safe doggy chocolate in. You can see him eating that in the video below.

What other foods are dangerous for Frenchies?

As well as chocolate, the following foods should never be fed to a French Bulldog (or any type of dog for that matter).

I’ve done some extensive research into what fruits are safe to feed a Frenchie. My list also includes fruits that are dangerous and why. You can download the list of edible Frenchie fruits here.

I am not a vet, but I am a French Bulldog owner and have personal experience of this happening to our dog.

Ultimately, if you love your Frenchie and he has eaten any type of chocolate, you should probably err on the side of caution and call your local vet. In most cases, your pup is probably going to be absolutely fine.

However, with large amounts, and particularly dark chocolate, you need to take action fast.