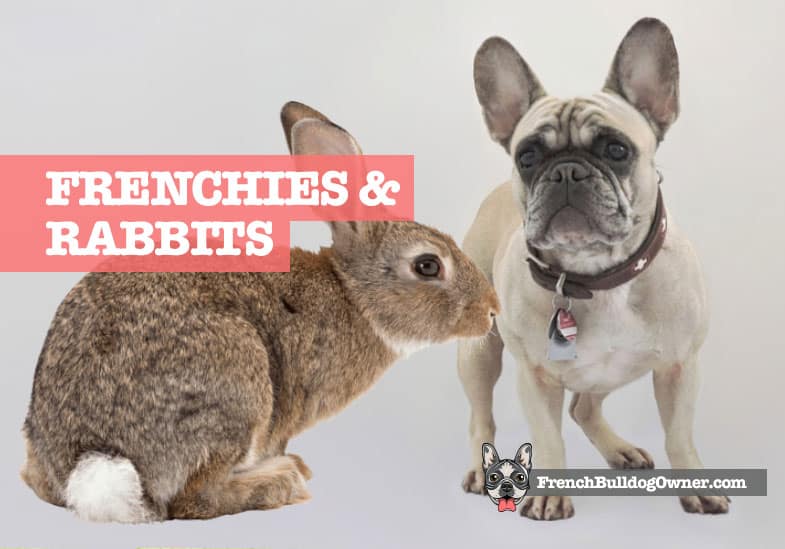 One of the biggest concerns when getting a Frenchie is how well they will get along with your existing pets. As rabbit owners this is going to be a huge concern. After all, dogs are natural predators and can have the in-built genetics to want to chase prey. But what exactly is the right answer, and will a French Bulldog get along with a rabbit?

So, what is the right answer and how should you approach this situation?

I personally would be very wary about introducing an adult French Bulldog to a rabbit. I say that because I have seen how our own Frenchie Claude chases squirrels and rabbits when we’re on countryside walks. However, it can be done, and lower down the page you can see a 7 step introduction on what to do to help get the best results.

To help you decide I’ve spoken to French Bulldog owners who successfully own both a rabbit and a Frenchie. I’ve compiled the best of that knowledge into this short guide.

We need to appreciate is that even domesticated modern dogs will still retain the predatory instincts of wolves. Dogs can see small animals such as rabbits, bunnies, guinea pigs, hamsters, squirrels and mice as prey.

French Bulldogs are no different, and whilst they aren’t the best hunters as a breed, they will still retain a primal instinct for raw meat and the thrill of the chase.

However, Frenchies are a low risk breed of dog when it comes to interaction with non-canine breeds. They are nowhere near on the scale of risk compared to an Afghan Hound, Foxhound, Beagle, or Border Terrier – all of whom are aggressive hunters.

I recently spoke to a handful of people who own a rabbit and then subsequently bought a French Bulldog into their home. All of them reported that the introduction went ok, and they have had no problems.

Here’s what they had to say.

What Frenchie owners with rabbits say

“When you asked on Facebook whether French Bulldogs are good with bunnies, I can only give you my own experience. We have a rabbit and a Frenchie, and they get along with no problems. In fact, Cedric even licks the head of our rabbit. I won’t leave them alone together, but so far we’ve never had an issue from the moment we brought Cedric home as a puppy.”

“In my experience Frenchies have no problem settling into a home which already has a rabbit as a pet. However, we think the introduction worked because our Frenchie was a young puppy when he met our own bunny, and so has grown up to accept the rabbit and vice versa. The rabbit was bigger than our French Bulldog when they first met!”

“We breed Frenchies and have three rabbits also. Our French Bulldog puppies get on fine with the bunnies. Once all the sniffing and pawing has stopped the novelty of them meeting won’t be an issue any longer and our Frenchies treat the rabbits very gently.”

Can you see a common theme here?

All of the owners I spoke to already had a rabbit before they got a Frenchie. The French Bulldog was introduced to the bunny as a puppy.

We had a similar scenario in our own home as we already had a cat. You can see how we introduced them in this guide to Frenchies and cats. The process of getting them to live in harmony together is very similar.

Here’s how to do it.

How to introduce a French Bulldog to a rabbit

There are many examples on YouTube where a dog and a rabbit will share space in a perfectly friendly and non-aggressive manner. However, whether you choose to let them loose together is another matter and will be down to the initial introduction and temperament of your dog.

Many French Bulldogs can be trained to respect their bunny housemates, and here’s a short guide on how you can introduce the two.

1. Start with a cage introduction

Make sure you have your Frenchie on his leash and under your full control. Then you can place your rabbit down in the cage in the middle of the floor.

Your Frenchie puppy can then sniff around the rabbit’s cage, and your bunny can also check the dog out without being fearful of being attacked.

If your Frenchie remains calm and doesn’t swipe at the rabbit’s cage, go through the whole “good boy” routine and offer him a treat as a reward.

If your Frenchie does take a swipe at the rabbit’s cage and shows aggression, don’t scold or shout. French Bulldogs do not react well to shouting and this can excite them further, compounding the issue.

What you should do instead is give the Frenchie a light tap on the backside, distract him, and push him gently away from the rabbit’s cage.

Calm your Frenchie down and then let him approach the rabbit again, repeating the praise or discouragement depending on the dog’s reaction.

4. Repeat the introduction over the coming days

Repeat this process for 10 minutes for a few days. The Frenchie owners I spoke to with rabbits said they did this training process for around 3 to 4 days, with the bunny still in the cage.

Don’t do the training for any longer than 10 minutes at a time as your Frenchie will get bored and could even start to play up.

5. Take the rabbit out of the cage and hold him

After a couple of days with no incidents, it’s time to take your rabbit out of the cage, but always in your arms at this point.

It’s important to have another person helping you when this happens, as your dog should still be on a leash so he can’t suddenly jump at the rabbit.

With the rabbit in your arms, let your Frenchie approach and sniff.

6. Repeat this process for another few days

Just like the cage training, repeat this for another few days.

Some of the rabbit owners I spoke to said that their Frenchie puppy got bored after the third day. That’s a good sign, as it means normalization has started.

Once you’re comfortable that your French Bulldog is good with your rabbit, let both have the floor space.

However, only do this if you can be there 100% of the time to supervise the interaction.

Does this work with older French Bulldogs?

Whilst I have no experience of doing this myself, the owners I spoke to had only ever done this with a Frenchie puppy.

From my own experience of owning a Frenchie, I know how hyper the puppy phase can be. Puppies have a very limited degree of self-control and this over-excitement could be very dangerous with a rabbit.

It might be that this works even better with an older French Bulldog who has learned to curb his aggressive tendencies. Unfortunately, I don’t have any evidence of second-hand opinion on whether this would be the case though.

What about chasing wild rabbits?

A French Bulldog who has been raised from puppyhood with your domestic rabbit could still chase and hunt down wild rabbits. I see this exact behavior with Claude our Frenchie… he gets on with our cats but will chase ones he sees when we on walks.

My personal view is that he doesn’t see our cat as a cat, and it could be the same with how your Frenchie views your rabbit.

Here are some comments I found on Facebook from French Bulldog owners relating to their dogs chasing (and in some cases) killing rabbits.

“I let our Frenchies out to chase a rabbit recently and then went to check on them 15 minutes later. My two-year-old brindle was gnawing on a very freshly dead rabbit and wouldn’t let our 4-year-old pied get near his snack. He had eaten half the head. Who knew he was fast enough to catch a rabbit?”

“Dogs are predators and French Bulldogs can run very fast if they want to. We learned this lesson ourselves recently so if you see a sweet bunny just trying to eat some clover in your yard then keep your dogs in house.”

“We live on a small 15-acre plot near farmland and our Frenchie will chase a rabbit into the woods every time he sees one. We’ve had to fit him with a GPS collar as last week we ended up losing him for two hours.”

“I stopped letting my Frenchie chase rabbits because one of them got botflies which the vet said that rabbits are notorious for carrying. If your Frenchie chases rabbits and ends up catching one, then don’t forget to give him de-worming tablets. You might also have to battle roundworms.”

The dangers of wild rabbit to dogs

That last comment about possible infections is an important one. If your Frenchie does catch a wild rabbit, he’s going to want to tear it apart and possible even eat some of the flesh.

Whilst it is uncommon for a dog to become seriously ill from eating wild rabbit, there are some diseases and ailments they could be at risk from:

What dogs are said to be good with rabbits?

I read an article on the PetHelpful.com website which was written by a vet who also breeds rabbits. He said that the following breeds get along with rabbit in his experience (see source):

He went on to say that the following dog breeds are more likely to chase and possibly kill a rabbit:

As a general rule of thumb, French Bulldogs are very good with other pets and in the main, should be good with rabbits and bunnies.. But this appears to be much more so if the Frenchie has been raised with the non-canine pet from their puppy ages.

We saw this work perfectly with our cat and dog and you can see some more about this on our YouTube channel.