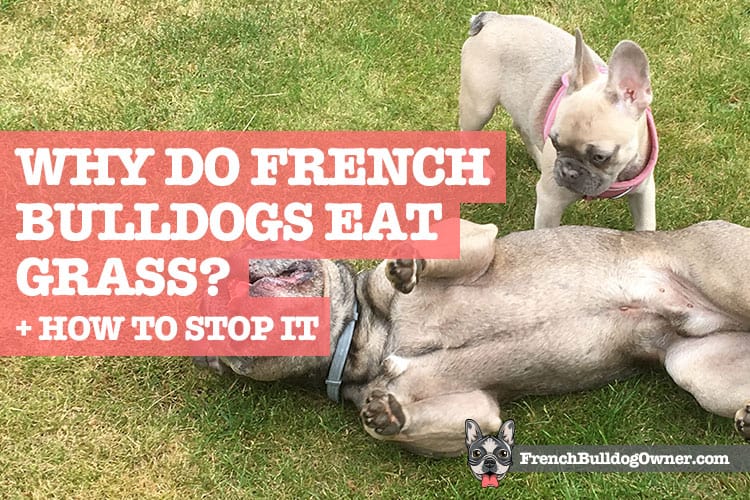 If you have a Frenchie you’ve probably seen them munch on grass, it’s way more common than you might think. When Claude first started doing this I was worried and frantically searching for answers as I’d heard it could be because he wanted to make himself sick. However, after a little research and talking to a vet, I’m a little more calm about it now. Here’s what I found out:

Why do French Bulldogs eat grass? Frenchies will occasionally eat grass to improve their digestion, get more nutrition in their diet, possibly to help with intestinal worms, or just simply because the dog likes the taste of grass.

Should you be worried about your Frenchie eating grass?

Your dog is both your best friend and your child. They’ll always be ready to play, and be there to snuggle you up when you’re down. But they tend to get in trouble a lot, especially with their choice of food.

I’ve seen Frenchies chew on the strangest of things; it’s part of their genetic make-up.

You see, generally, dogs like to munch on things. I’m sure you’ve heard of owners complaining about missing shoes and socks.

But for new owners, it can be a worry as there are some possible health implications (click to see all the health problems Frenchies can have) for what they decide to put in their mouth.

The first time I saw our French Bulldog eat grass I was concerned. How does a carnivore end up eating grass? I was even more worried when I saw him do it again, almost on a daily basis on our morning walk.

My first thought was that he must be ill and have an underlying health problem so wanted to make himself sick. I was also worred as a lot of fields and shrubs get fumigated these days.

However, having researched online and talking to our vet, I’ve found out that Claude was ok. That might not always be the case, so read through the reasons below.

Your French bulldog most likely eats grass because of one or more of the following reasons:

1. Eating grass due to a lack of minerals in the diet

Maybe your French Bulldog’s diet lacks fiber. Frenchies are known to supplement their daily food rations with grass because of this.

You might also notice that the older they get, the lesser they eat grass. There might be a direct correlation between age and their affinity for weeds and plants.

Most French Bulldogs munch on grass as a supplement to the diet you provide. Dogs generally have a keen sense of smell, and French bulldogs are no exception.

Some vets suggest that dogs can often tell which greens contain the minerals they like.

Depending on what you feed your French Bulldog, it is a possibility that their diet is lacking some essential minerals important to their health, and sometimes growth – here’s some guidance on feeding a French Bulldog puppy.

2. Eating grass to soothe their stomach

Frenchies are prone to stomach upsets due to the sensitivirt of their gut. Frenchies sometimes munch on some common grass to help suppress aches and pains.

Some of these plants and grass will contain anti-diarrheal substances and help them deal with stomach upsets. Most of these plants (or in this case herbs) are pretty easy to come by, as they are common weeds that grow around.

Sometimes a French bulldog will eat grass due to subclinical gastric or intestinal distress. This is thought to evoke grass eating, as is probably why people believe dogs eat grass in order to vomit up anything that’s upsetting them.

However, studies show that vomiting seems to be incidental to, rather than caused by plant and grass eating.

3. Eating grass to cleanse their insides

As a follow up to the earlier point, sometimes French Bulldogs eat grass due to its laxative properties. This usually happens when they’re trying to get out some uncomfortable substance they’ve eaten, which is generally food that doesn’t agree with their system.

It would help to pay attention to your Frenchie’s reactions to different foods you feed them. I like to watch Claude for a few days when there’s a new addition to his diet.

Also, there is an ongoing theory that thousands of years ago, long before dogs were domesticated, their wild ancestors who were frequently exposed to different kinds of parasites, would eat a variety of plants (including grass) as a method of purging these.

Grass and plants would pass through their intestinal tracts, wrapping themselves around the worms and pushing them out with feces.

The theory says that it is a possibility that our dogs still retain some of these habits today. As this remains a developing theory, I wouldn’t assume that your Frenchie has some parasites just because he or she is chewing on grass.

If you suspect that your Frenchie may have parasites, however, the best thing to do is to check their feces for any signs of parasites and then talk to your vet.

4. Eating grass due to boredom

Yes, dogs also get bored, and French bulldogs are no exception, too much inactivity can be detrimental to them.

When you see your Frenchie eating grass after not being out for a while or a lack of play time recently, it could be that you have a bored dog.

While they do this absentmindedly most of the time, be sure to check for other change in behavior in your Frenchie, as the cause could be one of those listed above.

5. Eating grass due to anxiety

French Bulldogs get anxious sometimes, and this could be happening for a lot of different reasons. The primary cause of anxiety is separation.

French Bulldogs get attached to their owners, and not being with them for a few hours can see them grazing your lawn as a sort of coping mechanism in the absence of any human interaction or company.

Other causes can be due to weather (as Frenchies can be very sensitive), hunger, or fear (especially when you have visitors).

How to stop a French Bulldog eating grass

Now that you’ve found out why French Bulldogs eat grass, I figured it would be helpful to share some ways stop them from doing it. Even though the grass is not harmful to a large extent, it is better to be on the safe side, to help avoid any health issues.

If you want to eliminate the possibility of your Frenchie eating poisoned grass, then your best bet will be to keep them indoors.

Bear in mind that you’ll have to engage them sufficiently to prevent the usual occurrence of them being bored. There are lots of activities you can involve your Frenchie in, but these would require space.

As previously stated, Frenchies can get bored. So, you’ll have to find ways to make them exercise their muscles.

Muscle atrophy is a big issue for dogs, and considering the body build of Frenchies, it’ll be more severe if they don’t get to train their limbs to support their upper body.

The best exercise, in my opinion, is taking your Frenchie out for a walk a couple of times a day for 15 to 20 minutes each time.

This way, they’ll get that much-needed exercise and interact with their environment or other dogs if possible.

An essential part of this journey is to improve on your French bulldog’s diet. There’s a variety of combinations you can try.

There’s also the use of supplements as an addition to the regular menu. As previously discussed, Frenchies have sensitive stomachs.

Sometimes, discipline is the best solution. If you can find time to instill behavior that ensures your Frenchie avoids grass occasionally, that would be the best solution; this can be done by continually rewarding them for behaviors you want to enforce.

Over time, they will begin to recognize the reactions from the two set of activities and act accordingly. French Bulldogs react very well to positive reinforcement.

Of course, till will take some time before results start coming in, but in the long term, I’m sure you would agree that it will be worth it.

5. Only let them on grass that has been untreated

If you notice your Frenchie still eats grass even after trying out some of the ideas above, perhaps it would be safer only let them on your lawn, where you’re sure they’ll come to no harm from ingesting chemically treated grass.

I’ve previously spoken about how you can create a French Bulldog area in your garden or yard in my guide to stopping Frenchies from digging.

Having your plant(s) eliminates the possibility of herbicides or other harmful chemicals. There’s also the upside that once your Frenchie gets used to that, they’ll hardly have a taste for random grass.

If you decide to go this way,  be sure to limit your Frenchie’s access, as too much might lead to vomiting.

I honestly think that you won’t ever completely stop your French Bulldog from eating grass. Claude still does this from time to time.

The truth is, if left unchecked, your Frenchie will continue to eat grass either as for fun, a supplement for their food, or any of the other reasons listed above.

Granted, it is not the worst issue a Frenchie can have, even though it can be infuriating.

But, don’t get overly concerned. In most cases it’s won’t be the sign of anything serious.