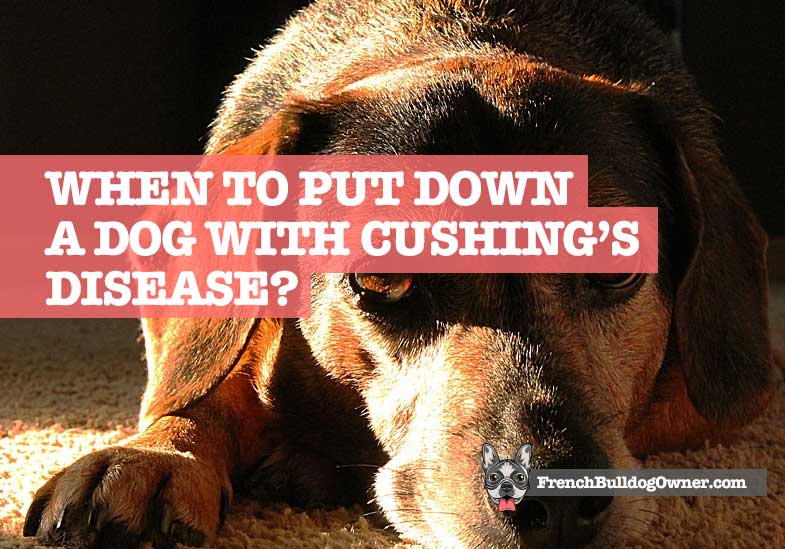 Important Note: This article has been checked and verified by a professional veterinarian for accuracy. However, you should always seek advice from your own vet before making any decisions on euthanasia as there are never black and white answers for this decision.

Having a dog that suffers from a terminal illness can be hard. This is especially if you know that you don’t have much time to be with them. My friend had a dog that was diagnosed with Cushing’s disease about two years ago. Having seen his experience, I decided to research more on the disease and write an article about it.

At this time, the symptoms may start to take a toll on the dog. This may be accompanied by anxiety and a deteriorating life. To prevent any further suffering, some owners prefer to euthanize their dogs as soon as possible. Others prefer waiting a few more days to come to terms with their dog’s decline.

What is Cushing’s disease?

Cushing is a lifelong condition that occurs in dogs due to excessive production of a hormone known as cortisol. The disease is also known as hyperadrenocorticism. Cortisol helps to regulate metabolism, manage weight, deal with stress, and maintain skin and tissue structure.

There are two types of Cushing’s disease – pituitary-dependent and adrenal-dependent.

Once it reaches the adrenal glands, it forces them to produce excessive cortisol. Pituitary tumors account for about 80% – 85% of naturally-occurring cases of Cushing’s disease.

The adrenal-dependent type is caused by a tumor that forms in one or both of the adrenal glands that are found above the kidneys. This then causes them to overproduce cortisol. Presence of the tumor initiates excessive secretion of the hormone. This type of Cushing’s disease accounts for the remaining 15% – 20% of cases of Cushing’s disease in dogs.

There’s another type of Cushing’s disease known as iatrogenic Cushing’s syndrome. It is not very common and occurs in dogs that have taken steroids such as prednisone for an extensive period.

Diagnosing these three types of Cushing’s disease isn’t easy. Dog owners may be required to take their dogs for multiple tests. An ultrasound is also used in certain cases to find out if a tumor exists on any or both of the adrenal glands. Symptoms are also normally vague and may appear together with those of other diseases.

The most common symptoms of Cushing’s disease include:

It’s important to remember that dogs with Cushing’s disease will not necessarily depict all these symptoms.

Who should do it?

There are many things that trouble pet owners when their dog is suffering from a chronic illness. Such include having to worry about their dog’s pain, saying goodbye, dealing with the accompanying stress, and trying to do as much as possible to make sure that the dog is alright.

Watching the dog’s health decline isn’t easy. This is especially if they have been a part of the family for a long period of time, hence, developing a close bond. Considering all these, it’s advisable for dog owners to speak to their vet when signs begin to show that the dog’s time is approaching.

Families can sometimes get caught up in the euthanasia dilemma where they fear ending their dog’s life too soon or waiting for too long. If the animal is no longer able to enjoy positive experiences, it may be time to let go.

Studies have shown that first-time pet owners often keep their pets for too long and end up regretting later. For those that have had similar experiences before, the decision is often easier and fast.

How do you treat Cushing’s disease in dogs?

Medication is normally used to manage the condition, and not cure it. Dogs suffering from either of the two types are normally scheduled for regular appointments and blood tests to monitor their response to treatment. Doses are adjusted accordingly depending on the dog’s reaction.

There are three common types of medication administered to dogs suffering from Cushing’s disease:

Dogs suffering from adrenal-dependent Cushing’s are put on either trilostane or mitotane for 2 to 4 months to reduce the tumor. Treatment can continue where surgery is not an option to allow the dog to live a positive life before symptoms start deteriorating their quality of life.

How long does a dog live with Cushing’s disease?

With appropriate treatment and regular monitoring, some dogs with Cushing’s disease can expect to live and manage well for many years. With a bit of luck and extra care, they can manage it. Treatment only helps your dog live comfortably and devoid of pain. It rarely cures the disease.

Dogs under medication are usually relatively symptom-free, happy, and with great appetites. As long as their owners can tolerate the excessive urination, they are normally great pets to have around. They also rarely “suffer” from the disease.

Medication can help to control small tumors for several years. For large tumors, however, the future isn’t as bright. If the tumor isn’t expansive, surgery may be a good option where the adrenal tumor is removed. This only applies to adrenal-dependent cases. For pituitary-dependent Cushing’s, surgery is rarely an option as the technology is still under development.

Dogs with pituitary-based Cushing’s usually have an estimated life expectancy of 2 years. It’s important to know that an untreated dog can live as long as that which is under treatment. Whether to consider treatment or not is a conversation best had with a veterinarian.

What dog breeds are prone to Cushing’s disease?

Cushing’s disease is common in the Dachshund, Poodle, German Shepherd, and terriers like the Dandie, Dinmonts, and Yorkies. Others that may also be predisposed include the boxer, Labrador Retriever, Maltese, Boston Terrier, Cocker Spaniel, and Australian Shepherd. The disease’s mode of inheritance is yet to be discovered.

Handy Hint: The Boston Terrier breed will often be mistaken for French Bulldogs. Both are prone to Cushing’s and also share some health traits. But there are some subtle differences between the two breeds.

What is the recommended diet for dogs with Cushing’s disease?

Dogs suffering from Cushing’s disease should be fed with low-fat foods and low fiber foods.

If your dog is suffering with this disease, you have my full sympathy. I don’t know really what decision we would make if our own dog Claude has Cushings.

Knowing when to put down a dog with Cushing’s disease is a tough decision you might need to make… but please do so in full consultation with your vet.