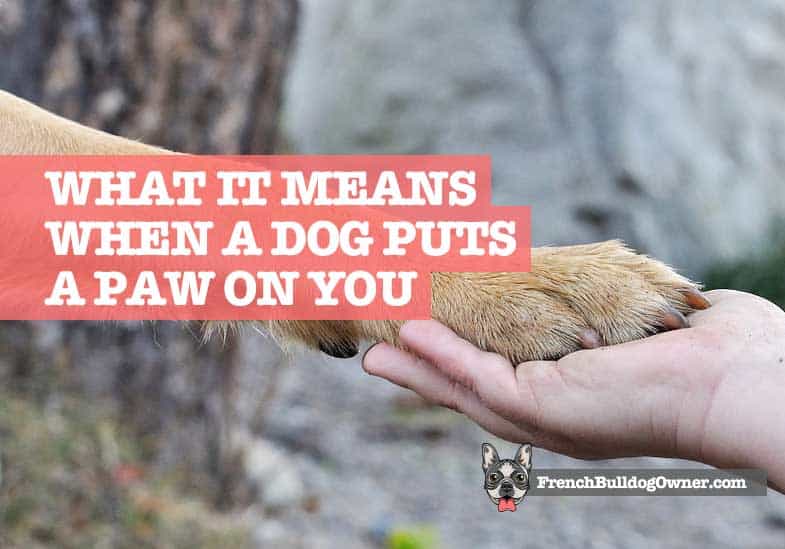 When a dog puts his paw up to you it is typically a very heart melting moment. They will usually do it when you are petting them, and they reach out and place a paw on you. Many people read it as the ultimate sign of affection, kind of like a person putting an arm around your shoulder, but what does it actually mean?

What does it mean when a dog puts his paw on you? Dog’s use their paws like we use our hands, and a dog putting their paw on you can mean a number of things, from initiating play, wanting to be pet or to generally get your attention. There is also an old myth is that it is the dog’s attempt at being dominant, but that is actually far from the case.

What does it mean when a dog gives you his paw?

It is certainly an adorable gesture, but what does it mean? We often wish we could talk to our dogs, but they actually are often trying to communicate with us through their body language.

If your dog paws at you after you have stopped petting them, that’s an easy signal saying: “pet me more!”. Cats also do this through headbutting and even grabbing at your hand, and while dogs may not have as much control over their paws, they will try this too!

Playtime is always a top priority with a dog and pawing at you is their way of getting your attention and getting you to play. They may also actively bring over toys to play with, so even if you are busy a quick game of fetch can satisfy their want for attention. They may also be feeling stressed out, wanting some TLC and reassurance, which can be shown through lip smacking, yawning and their ears being flattened back. In this case, taking them out of the situation may be the best bet.

Dogs are capable of incredible amounts of empathy and can often tell if you are feeling sad, lonely or even sick. If you are sad and your dog is putting its paw on you, that is actually a sign that they are wanting to comfort you and make you feel better. That is not only incredibly adorable, but also a reason why they make such good service animals and emotional support pets.

Also, taking a page out of Lassie’s book, a dog may be wanting your attention to either get some help, or just because they are curious. They may want to go outside, go for a walk or even get you to refill their water bowl. Timmy may not have fallen down the well, but if your dog is pawing at you and making vocal sounds, they may well want you to follow them.

Why does my dog put his paw on my face?

While pawing at your knees or arms may be endearing, having a muddy or gravelly dog paw stuck in your face can be both a nuisance and dangerous, depending on the size of your dog. Pawing in general is also a good way of getting mud or stains on furniture or your nice clothes.

Its meaning is the same as the reasons above, they want to be pet, play or get your attention, and medium sized and larger dogs are easily able to reach your face than smaller ones. However, while it is a sweet gesture, if you have a larger dog, or small children or elderly family members, a paw in the face can actually post a risk of causing damage.

To prevent this, teach your dog that pawing will not get attention, do not respond to pawing or barking or even make eye contact for around thirty seconds. They will soon learn that pawing won’t get the reaction they are looking for and will find another way of interacting and communicating with you.

Why does my dog put his paws on my shoulders?

Larger dogs are especially guilty of this, able to place their paws on your shoulders when you kneel down the pet them, as with Great Danes and even golden retrievers able to do it when you are standing up.

There is a prevalent rumour that this is a show of dominance, but that is most likely not the case. If your dog considered itself to be above you in the social ladder, it would not listen to your commands and just generally ignore you and putting their paws on your shoulders is the opposite of that.

It could be because they did it previously when you were petting or hugging them, and they liked the sensation. This is completely fine, and if you also enjoy them doing it then there isn’t any issue. However, if you do not like them doing this, or if you are worried about them doing it around children or elderly or disabled family members, it is best to discourage it and train them that it is not allowed.

There is also a popular idea that dogs dislike hugs, but this isn’t an officially scientifically proven theory and depends on your individual dog. Similar to cats and other animals, if you dog tries to escape from hugs, then they may not like it, but others may like them and actively seek them out.

How to read dog body language

While a lot of animal communication is silent, dog body language is actually very easy for humans to read and you probably already know several meanings both through living with your dog and through general popular culture.

Why does my dog put his paw on me and push?

As mentioned above, a dog putting their paw on you if often a sign of affection. Pushing against you when pawing is not a sign of aggression or dominance, as some myths would like you to believe, and can be just their strength behind the pawing.

Strangely, it could be your dog simply joining in with the petting, showing you he likes it, or even stretching out in contentment; If your dog wanted you to stop, they would get up and walk away, rather than remaining where they are.

Different dog breeds, as well as different individual dogs, are all different, with some being far more paws-y than others. It is important that you pay attention to your dog’s body language so you know what they are trying to tell you.

How do I let my dog know I love her?

While we aren’t able to vocally let them know we love them (although we still do regardless), sometimes you really want to tell your dog just how much they mean to you and it can be heart-breaking to think that they may not know.

Dogs can understand a few different words they are trained to respond to, including ‘walkies’, ‘good girl’ and the like. Dogs can, however, also understand the tone in a human’s voice in both positive and negative ways. The higher pitched tone of the baby-talk voice that many people use for their dogs actually registers with them in a positive way and talking with them in a calm tone of voice can actually help to relax anxious or energetic dogs.

While two-way vocal communication may not be possible, you can still pay attention to what your dog is telling you through reading their body language. They can also get frustrated getting you to understand what they are saying, so paying attention to how they are feeling in a certain situation can also help your bond.

Dogs are incredibly perceptive animals regardless, and it is likely that they already know that you love them through your day-to-day interactions. However, there is no harm in telling them again, just to be sure!

How can I tell if my dog is happy?

Dogs can also try and tell us how much they love us too, through different actions that you may not have noticed or just assumed were a part of a dog’s day to day activities.

Tail wagging is the classic sign of happiness, as well as a lolling tongue and soft eyes. Sleeping is also the ultimate sign of a relaxed dog, a sign that they feel completely safe and comfortable with sleeping around you.

Handy Hint: Read this guide to find out what signs to look for if you believe your French Bulldog could be depressed.

If your dog stares at you for a long period of time, without prompting or expecting a treat, they are actually showing that they love you. It has been scientifically proven that dogs get a oxytocin release when they share a gaze with a human, but be aware that you are sending the right message as a forceful stare can be taken as a sign of aggression rather than love. Luckily, dogs are very good at reading facial expressions, so it is more likely that they know if you are looking at them with affection.

Excited dogs are also very interested in playing, which they can show through play-bowing down on their forelegs, a signal to initiate play which you can take as an open invitation to start a game of fetch. You will often see dogs doing this to one another when they are playing, a good sign to know whether or not two dogs are fighting or playing.

While it often isn’t exactly desirable, short and higher pitched barks are also a sign of happiness or excitement, although training can help to limit this if you are trying to discourage loud barking. However, barking is second nature to dogs so you shouldn’t actively scold them for doing it, instead encouraging them against barking with positive reinforcement for staying quiet.