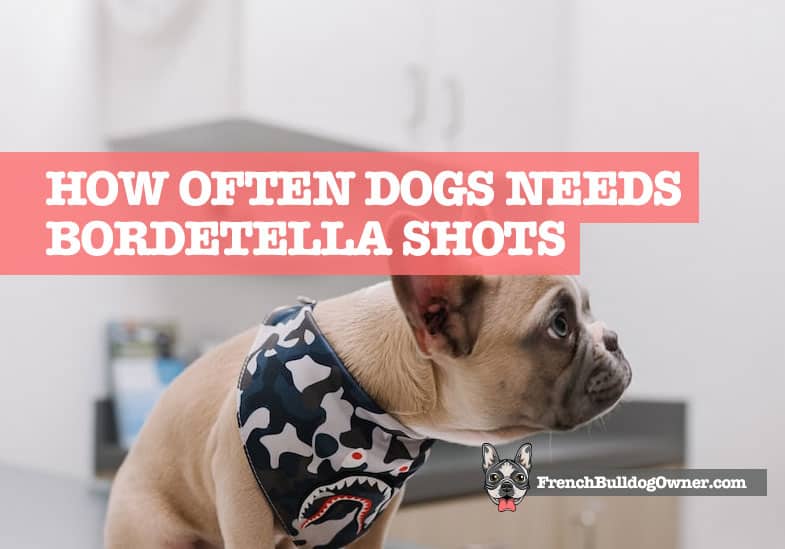 Bordetella is the bacteria that causes kennel cough. It is highly transmissible, from one dog to another, and even to humans and other species. In most countries, vaccination is not mandated.

If your dog regularly comes into contact with other dogs, it’s possible to get it vaccinated against Bordetella, at least every six months. Most doggy day care centres and boarding kennels will insist on vaccination as a condition of entry to their premises and programs.

Kennel cough is generally not life threatening. Healthy dogs with strong immunity should recover from a bout in good time. For those with less robust systems, the process will be slow and painful.

Why dogs need a Bordetella shot?

There are many species of Bordetella bacteria. The three most common species affect dogs, humans, and other domesticated animals and birds, to varying degrees. The vaccine developed for dogs is targeted at combating Bordetella bronchiseptica, which has proved to be the most problematic of the species.

The vaccine has a high degree of success in preventing the spread of the bacteria. However, it is less than 100% effective, and there remains the possibility of your pet contracting one or more of the other species. Efficacy wanes fairly quickly, therefore your dog will need to be inoculated at least twice a year.

Bordetella is a virulent organism that is spread by coming into direct contact with saliva and other particles that may be coughed up by infected subjects. The bacteria reproduces rapidly and, if unchecked, will colonise the respiratory tracts of the host and spread swiftly to others.

The incubation period for bordetella is 3-10 days. An infected dog can shed viable bacteria for up to 4 months after incubation.

In dogs, the resulting condition is known as kennel cough. In humans, we call the effects, whooping cough. Most other types of mammalian pets, livestock and poultry are also susceptible to the effects of the bacteria.

The condition is highly infectious and is transmitted easily from one host to the next. It is generally not considered life threatening in healthy animals and humans, that have no underlying ailments.

If your dog has a robust metabolism and immune system, it may exhibit symptoms but not be fazed by kennel cough at all. It will eat and play as normal.

For very young or older dogs, or those with respiratory problems, the bacteria could reek havoc. Humans with health problems such asthma and cystic fibrosis could experience significant breathing problems if they contracted whooping cough.

The Bordetella vaccine is generally not mandated by authorities but it is strongly advised that you vaccinate your dog if it comes into regular contact with other animals. This may be at a day care centre, boarding kennel or even your local park.

Usually, the establishment which houses or cares for your dog will insist on your dog being being vaccinated, at least every six months. Young animals are particularly susceptible to Bordetella because they explore their environment with their mouths, and their immune systems are underdeveloped.

Inoculations are available in the form of injections, tablets and nasal spray.

Initially the bacteria will take hold in the throat area. In humans, this phase has been described as feeling like the beginnings of a common cold or the onset of influenza. The patient will have a sore throat and red, runny eyes. These will be followed by a fever, with a rising temperature as the body tries to fight off the invasion.

The bronchial tracts provide the ideal, moist and dark environment for the bacteria to thrive in. They multiply rapidly and soon colonise the respiratory tracts, causing an irritation in the upper chest.

The natural response to this is to cough. It is a dry, hacking cough even though the inflammation often causes a build up of mucous. The sound has been compared to that of a goose honking. The pain of the infection is exacerbated by the painful action of consistent coughing.

Coughing bouts are intense and may be followed by gagging. They recur frequently during the day and seemingly get worse at night. The force of the coughing may cause bleeding around the eyes. In humans the name of the disease is derived from the sound made when the patient gasps for breath at the end of each coughing spell.

Bouts of coughing could return periodically for several months after the infection. Also, having kennel cough once does not prevent your dog from contracting it again, from the same Bordetella species or another.

The effects of a Bordetella infection can be exhausting for both man and beast. If your dog is resilient and healthy, it should recover seamlessly without medical intervention. For others, it will be a slow process.

If your dog is showing signs of lingering malaise, there are measures that you can take to speed up its convalescence.

Antibiotics are not without side effects that need to be taken into consideration. They can have a long-term detrimental effect on gut health and cause subsequent digestive problems which need to be managed.