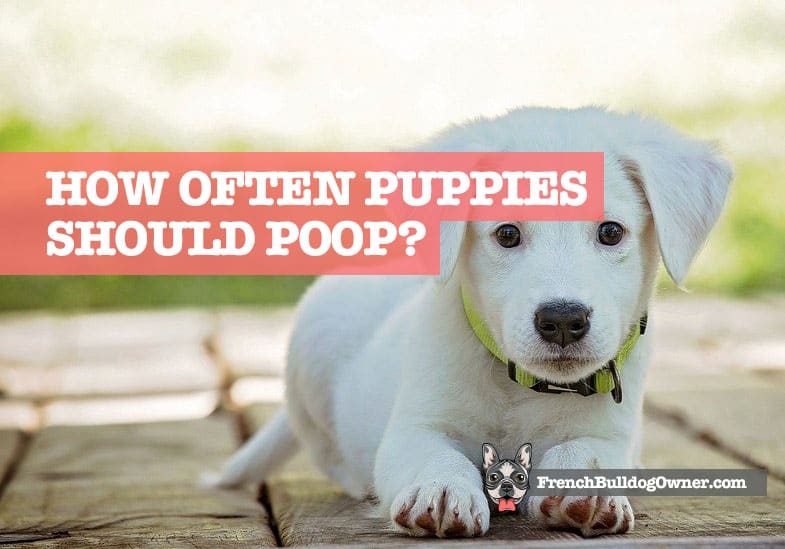 Remembering back to my days as a first-time dog owner, I could not believe how often my puppy pooped a day. If you are not prepared for it, the daily pooping routine can really come as a shock, as you need to be permanently on guard and ready for it.

In this short guide, I will explain how many times a puppy poops (a daily average), when you should be concerned, and what’s too much, or too little… and when it will stop!

How often do puppies poop a day? The majority of puppies will poop as often as 5 times a day. This amount of daily pooping is perfectly normal for puppies from 8 weeks, through to 3 months, and then 6 months of age… until they become adult dogs.

How many times a day should a puppy poop?

To summarize, how many times a day should a puppy poop could end being around 5 times, but often less and often more… as I will explain below. You might need to “second guess” or “predict” your puppy’s pooping habits!

Yes, it’s true. If you know when and how often a puppy should poop, it will help you to improve their house training, health, and your own sanity to be honest. When we first had Claude, it was like having a baby human all over again… that stressful.

In simple terms, the younger in age the puppy is, the more often they will need to poop in a day. As a general observation, we found that it could be as many as 5 times a day before they grow to 12 months old – but it will depend on their diet as well, not just age.

Whilst this might seem like a lot of pooping, by doing a poop as often as 5 times a day, it can actually be better for the puppy than storing it up and doing a single bigger poop. If your puppy is only pooping once a day, that could point towards constipation.

But pooping less frequently isn’t as problematic as dogs get older. In fact, as dogs advance into their senior years, they will start to poop less. In fact, you will see this as soon as your puppy becomes an adult dog – which is also helped by the fact they can hold their poop in now, whereas puppies are not so good at this.

As I mentioned earlier though, a factor that can dictate how often puppies poop will be what they eat. For example, let’s say there’s a lot of high fiber in your puppy’s diet, this is going to lead to them pooping more.

You might even find that 5 poops a day is a conservative estimate if your puppy is eating food like that, or anything that disagrees with his sensitive stomach.

Considering how often a puppy should poop will also be dictated by the frequency at which you feed them each day.

Puppies tend to eat 3 times a day, and you might expect to find them pooping just as regularly – and like clockwork too. When they get older, and reduce to 2 meals a day, the poops will reduce too.

It’s not something you probably you would ever need to know, but it’s important to understand what normal puppy poop should be like. The look (and feel) of a puppy’s poop can help you ascertain their health.

A health puppy poop should be firm, not runny. If it’s watery like diarrhea rather than the ideal log or segmented shape, your puppy could have an upset stomach.

Conversely though, a hard stool could also point to a problem, if… it’s combined with a less frequent pooping. In cases like this, your puppy could have constipation and is finding it tough to pass a stool due to the hardness.

Poop that doesn’t look right in color, isn’t good. A normal and healthy stool shade should range from medium to a darker brown hue. If there’s any strange colors such as black, gray, green, yellow, red or white ask a vet for a professional opinion.

Almost all puppies are born with worms, so if you do see white specks and worms in the poop, don’t rush into a panic. Your vet will be able to prescribe deworming treatment.

It goes without saying, that any sign of blood in your puppy’s poop requires professional intervention so make an appointment immediately.

You might have to get close enough to smell your puppy’s poop – or in many cases might be able to smell it a mile off… it will never smell good I am afraid to say, no matter how healthy your dog is.

Make particular note to any changes in the smell over time. For example, poop that starts smelling either very bad (and I mean a lot worse than normal) or even sweet could point to a problem.

The normal size of a puppy poop depends on the size of the dog. You have a large breed, you have large poops I am sorry to say… not a great though, particularly during the younger months when puppies will poop more often.

With that in mind, don’t go comparing the size of your puppy’s poop to another one, as unless they are the same size and breed, their poop can be very different.

The only time to be worried about size would be if you start seeing regular changes in the appearance.

What you should do if you are worried

If your puppy’s poop has changed in appearance, or if your puppy more often than you think is normal based on my research, you should always call a vet. Before that though, here’s some initial guidance on what to do.

If your puppy poops less often than normal

If your puppy has stopped pooping as many times as they normally do, it could be age-related. As discussed earlier, when puppies reach 8 months and up, their meals might reduce and therefore, poop will too.

However, if nothing has changed in terms of diet, there could be a constipation issue at play. Vets can prescribe a stool softener or dietary tweak like adding in high-fiber foods.

When the poop is watery, it can lead to a puppy becoming dehydrated due to the water being lost. Speak to your vet, and they might recommend you encourage the young dog to drink more water (but not excessively) to keep fluid levels up.

Also try to eliminate any other factors that might lead to diarrhea. It might be stress, illness, a change in diet, something they ate, or even medication they are on.

If your puppy’s poop changes color

One of the most confusing things to see with puppy poop is when it changes in appearance. Green can occasionally be due to a puppy eating grass, but as a general comment, seek advice when you see color changes.

How do I know when my puppy needs to poop?

Now you know how many times a day your puppy poops, you need to be on-guard to get them out the house or on a mat when it happens – knowing when they need to isn’t as hard as you might think though.

Most puppies will need to poop about 30 minutes after eating. But this will improve as they get older, as they can usually hold a poop in for one hour for every month in age they are.

In simple terms, that means a 6-month-old puppy might be able to hold their poop for 6 hours. I don’t advise you try testing this though. By 8 months of age, they will be at the level an adult dog can hold for – 8 hours.

To conclude, be prepared to take your puppy outdoors to poop inside the first 30 minutes of their meal.

Based on my own experience of puppy ownership, I would also take them outside just before they go to sleep at night, and as soon as you wake up in the morning.

Signs your puppy needs to poop

Whilst you can work into a routine as best you can, puppies won’t always poop often and like clockwork – meaning you need to have your wits about you to see when it’s going to happen off the timetable!

Here’s what you need to look out for when a poop is imminent.

1. Restlessness behavior or pacing and circling

The most obvious sign your puppy needs to go, is them walking around, pacing up and down, acting strange, and perhaps circling the room. It can look like they are agitated, as they are looking for a place to lay a fresh poop down on.

You might see them sniffing potential target areas too.

Puppies soon learn how to get your attention, and if you have started potty training, they might try and tell you they need to go out the back door by vocalizing it.

Whining combined with pacing near the door is a sure sign that a puppy needs to poop more often than you had anticipated.

To be honest, it’s probably too late by this point. If you try pick them up, you might make the mess a whole lot worse than just letting them assume the position and get on with it.

How often puppies poop does have a lot of factors involved, but as a rule of thumb, 5 times a day isn’t at all unusual.

When Claude was a puppy, we had to deal with our puppy pooping many times a day, but in retrospect it probably wasn’t that unusual despite it seeming like a constant stream.

Over time, how many times a day your puppy poop will start to reduce down with age.