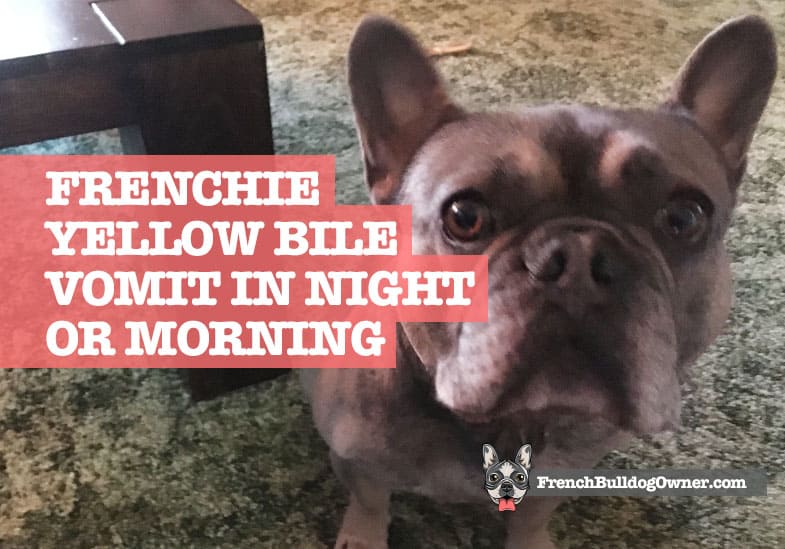 Does your French Bulldog vomit in the morning or during the night? Are you finding pools of yellow bile or slimy foam on the floor? If yes, it might be that your Frenchie has the hunger pukes. It’s very common, and we’ve had the same thing with our Frenchie Claude… but we managed to get it to stop.

In this guide I am going to explain some reasons why your French Bulldog is throwing up at night, and what the yellow foam is that you see each morning.

Why does my French Bulldog throw up in the morning? Your Frenchie could be vomiting yellow liquid at night or in the morning due to the “hunger pukes”. This can happen when dogs go a long time without eating and can often be stopped by feeding them a little food before bedtime.

Before you read on further, everything in this article is based on personal experience of owning a Frenchie and gives my opinion on what it might be. It doesn’t necessarily mean your Frenchie is puking in the morning for the same reason.

I am not a vet and advise that you always talk with veterinary professional if you are worried about your Frenchie vomiting.

A few months back we would come down almost every morning to find our French Bulldog had puked yellow bile vomit on the floor overnight. Our initials thought were that the vomiting of yellow liquid could be a food allergy, so decided to change up his diet.

Claude was originally on Royal Canin dry food, so I just switched to a different brand for two weeks – I wanted to see whether our French Bulldog would throw up in the morning due to his food.

The next morning, I came down to the kitchen and there were new pools of yellow vomit and bile. No chunks in the sick, just a sticky yellow liquid like before.

It continued on for a few more days too… so he wasn’t puking in the morning because of what he was eating.

Then I had a thought… our French Bulldog was vomiting at night, probably in the early hours of the morning between 4am and 6am (I say this because I heard him heaving one night).

His last meal tended to be around 1700 hours… so by the time he’s puking yellow bile it’s around 11 to 13 hours after his last meal. That’s quite a long time for a dog to go without eating, so I decided to see what the online vet forums said.

It confirmed my thinking; the reason our Frenchie was being sick in the early hours of the morning was to do with the “hunger pukes” … I felt really bad! This is also known as bilious vomiting in dogs (see the PetMD.com definition).

What we do now is split his evening meal up into two parts or give him a few food treats before bedtime. That means our Frenchie now eats a smaller meal at 1700, plus again at around 2230 to 2300 hours… and guess what… it’s worked!

Our Frenchie has stopped vomiting during the night and we no longer have any yellow vomit and slime to deal with each morning.

Bilious vomiting is something that can happen with all dog breeds. The yellow bile you see in the morning is what your Frenchie has puked up due to hunger (possibly).

It happens when bile gets into the stomach or your Frenchie has an empty stomach and their body will naturally want to expel it.

However, and this is a big point; please don’t assume your Frenchie is vomiting yellow liquid because of the hunger pukes. Bilious vomiting should only be diagnosed by a vet.

What I am saying here is that this is what was wrong with our Frenchie. I just want to make sure that you don’t misdiagnose your dog if it’s something more serious.

It appears that Claude was vomiting up yellow bile in the morning due to the hunger pukes, but it could have been for any number of reasons. For example, here’s what other vomits could mean.

It’s just our personal story of what happened, and what worked for our Frenchie.

This is what worked for us, so please just take it all with a pinch of salt. Always do your own due diligence when it comes to your dog’s health. What I am describing here might not be what is wrong with your dog.

If you see other symptoms or have concerns, please call your vet.