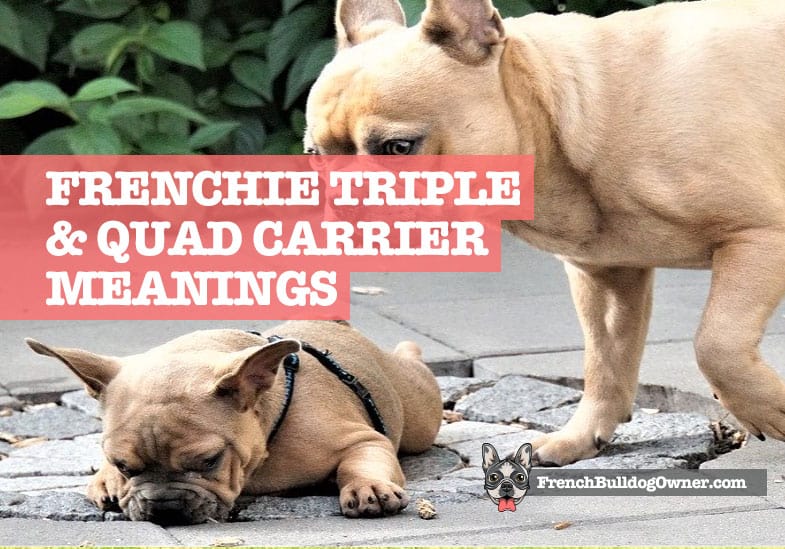 The terms quad carrier and triple carrier will often be seen on websites with Frenchies for sale. It’s something I only stumbled across recently, as had never heard of this before, or knew what it all means.

Until now…. Having spoken to a breeder very quickly on social media, they gave me a very quick overview of what the two terms mean, and what the differences between a Frenchie triple carrier and quad carrier are.

It’s all about the colors apparently.

Just like the Frenchie triple carrier meaning, a quad French Bulldog has the potential to produce 4 rare colors in the litter if mated with another quad carrier of the opposite sex.

In terms of French Bulldog colors, this breed is renowned for a wide range. Think about all the different colored Frenchies you’ve seen in your time then compare that to a breed such as a Pug or Beagle – you don’t get that color range do you?

The colors above are the ones that are recognised by the Kennel Club and French Bulldog clubs as being the standard colors.

Then there is the marking on their coats as follows:

Then there are the rarest colors including:

Please note that according to the French Bulldog Club of England, this breed should only come in 3 colors; brindle, pied, and fawn.

They go on to say that the colors often listed in triple and quad carrier ads from breeders such as black and tan, blue, chocolate, lilac, merle of other colors are not recognised by the official standards of the Kennel Club.

In fact, they go so far to say that:

“There is nothing rare or unusual about any of the colours listed above. They are uncommon because ethical breeders choose not to breed them. Rare colours are nothing more nor less than a marketing scam.”

I am not a breeder, and I don’t know huge amounts about breeding Frenchies. I am just an owner that loves my dog. But having read this now and seen ads online for French Bulldog quad carriers for sale, it makes me think this might not be a good thing.

This is especially true when you consider the next statement I found on the French Bulldog Club of England’s website:

“Long ago in the past these colours were found to have health problems not usually found in the breed. Some fad colours have been linked to health conditions, specifically, blues with a condition called colour dilution alopecia this condition is so common in blue dogs of every breed that it is often referred to as Blue Dog Alopecia. This condition can result in hair loss and chronic skin inflammation. This inflammation can lead to skin ruptures, cracks and injuries, leaving the dogs afflicted by it, prone to Staph infections, or even MRSA. In some breeds blue dogs can suffer from an immune linked disorder which can cause puppies to die within the first few weeks after birth.”

I think I need to do some more research into what quad carrier French Bulldogs mean, and how quads and triples might be a bad thing.

What I will do in the coming weeks is see if I can interview a Frenchie breeder to go into more details about the quad and triple meanings and explain why these colors are seen as bad… it would be great to get both sides of the argument.

If you are a breeder and want to take part in the discussion, please get in touch!

Whilst you’re here, how about taking a look at some of the most recent articles on my blog?