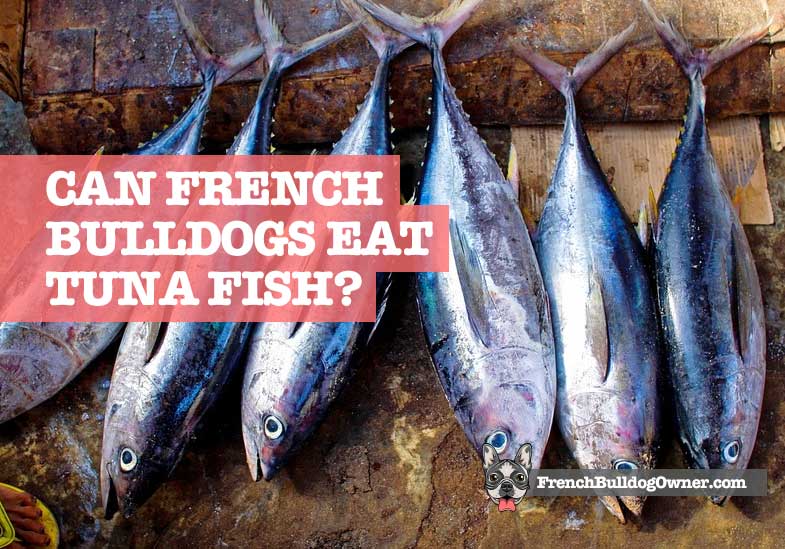 Our Frenchie eats a range of human foods including certain vegetables and fruits, but what about tuna fish? Is tuna fish safe for a French Bulldog to eat? Does it have any health benefits? How should it be served, for example raw, canned, in oil, brine, or water? I decided to create the ultimate resource to tuna fish and French Bulldogs in one handy guide.

Can French Bulldogs eat tuna fish? French Bulldogs can eat tuna fish, but only in small amounts and as a very rare treat. Whilst raw and canned tuna is high in protein and rich in omega-3 fatty acids, it can contain high levels of mercury meaning it can be dangerous in large quantities. Tuna should not be a staple part of your Frenchie’s diet.

So, to conclude, your Frenchie probably won’t be harmed if you very occasionally let them eat some tuna as a treat. But what are the facts that make it potentially not safe despite the obvious health benefits?

I’ve done a lot of research into this so let’s find out with some more in-depth information.

Why tuna can be dangerous in large quantities

Whilst there are many off the shelf dog foods that now come with fish ingredients, tuna is one fish that should be avoided as a regular part of a canine diet.

Tuna are fish that live for a long time. That means they will consume more metals into their system that has entered into the water supply. One of the heavy metals that will be present in tuna is mercury.

In fact, fresh tuna fish has higher levels of mercury compared to other types of fish such as salmon. Eating it in excess can lead to a range of health problems which I will come into in a moment.

Just like with humans, too much mercury can poison a dog. And with dogs, and French Bulldogs in particular being a lot smaller than humans, they will be more prone to mercury poisoning at high levels.

That’s why I would never recommend that you let a French Bulldog puppy eat any amount of tuna. It’s best to keep on the safe side just to be sure.

If your greedy Frenchie has snaffled up some tuna that has fallen on the kitchen floor, he isn’t going to die. Far from it.

Your French Bulldog will love eating tuna, but it’s not something he should be fed on a regular basis.

Handy Hint: If you own a cat as well, please keep their food out of reach of your French Bulldog. Cat food will often contain tuna and most Frenchies are very indiscriminate about what they eat!

If your French Bulldog has consumed a lot of tuna and you see any of the following signs, you should take a visit to the vet, as it could mean they have mercury poisoning.

Please don’t be concerned though…

So that’s the dire warnings out of the way… the bottom line is; don’t feed your French Bulldog lots of tuna. It could make your dog very ill.

However, a little bit of fish in their diet occasionally isn’t a bad thing so you can give them a little cooked, canned or raw tuna fish as a rare treat.

Tuna is packed with healthy fats, minerals, protein, and vitamins… plus omega-3 polyunsaturated fatty acids. All good stuff I am sure you would agree.

The health benefits of tuna

If you do decide to let your French Bulldog eat tuna occasionally, here are some of the benefits to doing so, providing it’s not in large amounts where mercury becomes a risk.

Which tuna is best for a French Bulldog?

If you are going down the route of letting your Frenchie eat tuna in very small amounts as an occasional treat, then there are good and bad ways to feed it to them.

How to serve tuna to a Frenchie

As a rare treat, only give your French Bulldog tuna steaks, and make sure there are no bones present and you cut it into very small chunks.

Don’t season or spice the tuna, and definitely don’t have any salt on the fish.

Cooked tuna is a best for a French Bulldog, so either bake, grill, or steam it. I would recommend you do this instead of letting your Frenchie eat raw tuna.

If you do serve them canned tuna, make sure the tuna is in water and not brine or olive oil.

As with any new food that you are introducing to your Frenchie’s diet, give them a very small portion first and then watch for any adverse effect. Some dogs can be allergic to fish.

How much tuna is safe?

I can’t reiterate this enough, but tuna should only be fed to a French Bulldog as a rare and special treat. When treat time comes, I would say just a large spoonful and nothing more.

There are lots of calories in tinned tuna. For example, in a 6 ounce can, you have nearly 120 calories on average which is a lot for a small dog breed.

I’ve explained the health benefits a little that your dog can get from eating fish. Given the potential for mercury poisoning, you might wonder if other fish are safer for Frenchies.

You would be right in thinking there are, as tuna are long-life fish who have higher than average mercury levels.

So, what are better fish alternatives into a Frenchie diet?

Please Note: I am not a vet. All of the information in this guide to French Bulldogs eating tuna fish has been gathered by reading online blogs and vet websites. You should always consult first with your vet before feeding your dog any form of fish.

To conclude, we don’t let Claude (our French Bulldog) eat tuna. That goes for tuna-based dishes such as tuna mayo, tuna salad, tuna in brine, tuna in oil, and so on.

For us it’s not worth the risk and there are plenty of other human foods your Frenchie can have with no health concerns.

For example, I recently published a downloadable list of safe fruits they can eat.

With higher levels of mercury than other fish, it really doesn’t make sense to risk the health of your Frenchie when there are so many better alternatives to tuna you can add into their diet.