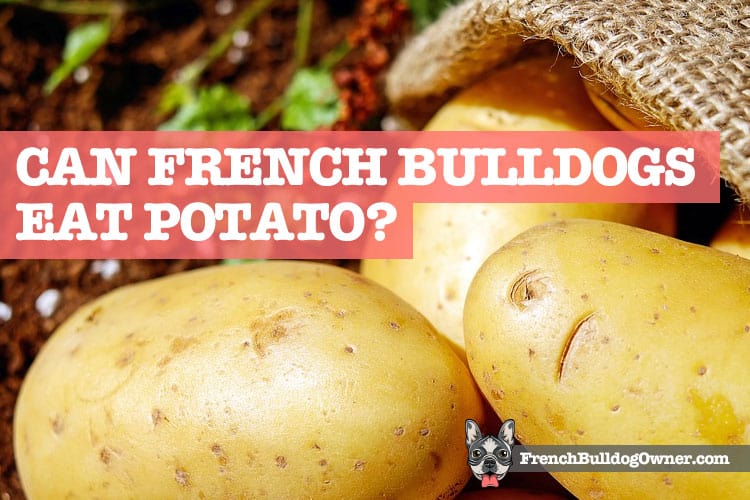 Our Frenchie is an eating machine. Anything that drops on the floor is fair game to him, but there are certain food types you need to make sure yours doesn’t eat. How about potatoes and French fries though? Are they safe for a French Bulldog to eat? Here’s what I found out:

Can French Bulldogs eat potatoes? You should never feed a French Bulldog raw potato as it contains solanine which can be toxic to some dogs. Potato should also not be given to diabetic dogs. However, healthy Frenchies can eat small amounts of cooked and boiled potato with no additional ingredients added.

That’s the short answer to whether French bulldogs can eat potato safely. I would recommend you delve a little bit deeper using the research below, as it really depends on your dog.

What the professionals say

The U.S. Food and Drug Administration (FDA) recently published research that warned dog owners from feeding their pets any food where potato was a main ingredient. You can see the press release about this on the FDA website, but here’s a little bit of an overview I gathered.

But I don’t want to worry you.

If you have given your French Bulldog small amounts of potato in his diet, chances are he will be absolutely fine.

This report from the FDA stated that the cases of DCM they have seen could be down to genetics, being more prevalent in certain breeds. The types of dog they highlighted in the report were larger breeds such as:

The time you should be concerned is if you see signs such as:

Based on the research I have done, and what other dog owners say, there is probably no harm in letting your French Bulldog eat small amounts of potato in their diet, but it needs to be regulated.

Full disclosure: we do not feed our French Bulldog any potato at all, as I don’t believe the risks are worth any of the potential health benefits.

Read on to find out how the different types of potato should be treated, and why you should avoid feeding your Frenchie raw potato at all times.

My answer to this one is 100% no. You should not feed your Frenchie raw potato because there will be levels of toxic solanine present if it’s not completely cooked.

Solanine naturally occurs in potato and can be poisonous to some dogs. Here’s what the Wag Walking website say about potato green poisoning.

“Green potato poisoning in dogs occurs when a dog consumes too much solanine, which is a glycoalkaloid naturally produced in green or raw potatoes, potato skins, and the foliage from the potato plant. Solanine poisoning can cause heart problems, difficulty breathing, and gastrointestinal upset. The raw potato and skins also contain chaconine, which is toxic and can cause irritation to the digestive tract, nervous system symptoms (tremors), and kidney function disorders.”

Let’s be clear though, your French Bulldog would need to eat a lot of raw potato for it to have an adverse effect on him – but still, it’s best avoided at all costs.

However, if the potato is cooked or boiled, the levels of solanine will be greatly reduced.

Always cook or boil the potato and feed in small amounts

If you do want to feed your Frenchie some potato, is must be baked, cooked or boiled first, and with absolutely nothing else with it.

It should be plain, so no butters, salts or other flavourings.

Is potato healthy for a French Bulldog?

So now I’ve got the warnings out of the way, are there any health benefits to introducing cooked potato into a French Bulldog’s diet?

I guess it depends.

Potatoes include a great range of vitamins including vitamin B6 and C, plus other nutrients such as iron and magnesium.

But the potato needs to be prepared properly, and only be considered as an occasional supplement to their normal diet.

However, I’ve seen enough evidence online to discourage me from letting our Frenchie even have small amounts of potato in his diet. It’s not just from reading that FDA press release, but there are also other health concerns you should consider.

What’s potato? It’s a huge carbohydrate, I don’t really need to tell you that.

There are plenty of dog foods on the market which contain carbs, including potato, but I don’t believe it should be in your Frenchie’s diet. Here’s why:

Carbs and starch are fine in small amounts, but in larger amounts can lead to insulin resistance and obesity in your dog. That’s why potato is an absolute non-starter for any dog who might have diabetes.

And here’s the thing.

Many of the dog foods you find on the shelves will be packed full of carbs and starch, and this can lead to a spike in insulin possibly leading to thyroid disease and some types of cancer.

So, bottom line is, I don’t believe potatoes are a great choice for a French Bulldog, but like with most foods, they can be fed in moderation.

Let’s look a little deeper at what types of potato you might let your French Bulldog eat if you are comfortable with the possible health risks.

A small amount of mashed potato should be fine for your Frenchie, but don’t feed it to them if it has cream, butters, or gravy in it or with it. Make sure that the mashed potato is free from any other ingredients, including salt.

Cream and butter are one of those foods that can make your dog get really bad diarrhoea, and you don’t want to be dealing with that – and more importantly, your Frenchie shouldn’t have to if it can be avoided.

Sweet potatoes don’t include solanine, which is great news for French Bulldogs. If you were to feed any potato your Frenchie, I’d choose sweet potato any day of the week.

However, it’s still recommended that you do this in moderation.

I would still cook it thoroughly, and certainly wouldn’t add any form of flavouring or salting to it – and that includes frying, so cook the sweet potato in the oven with nothing added to it.

Sweet potato includes A, B, and C vitamins plus calcium, potassium, magnesium, and iron so have some great elements. But they are still a carbohydrate at the end of the day, so less is more.

If a French fry (or chip for the UK readers) falls on the floor and your Frenchie eats one, don’t worry.

But it’s definitely not recommended that French Bulldogs eat French fries due to the grease, salt, and oils that are used to cook them.

Fatty foods are bad for dogs, and anything high in salt can put their kidneys at risk.

Do not feed your Frenchie potato skins. They can be very harmful to your puppy or adult dog due to the toxicity present in the skins.

Ingesting large amounts of potato skin could be lead to the following health problems and illnesses which are signs of toxic poisoning.

There is also something called heart arrhythmia; an irregular heartbeat.

If you catch your Frenchie eating any raw potato or the potato skins, I would recommend you take them to a vet immediately to be on the safe side.

Why I don’t recommend potato in a Frenchie’s diet

I just want to be completely clear; the advice in this article is based on me researching scientific studies, and reading what vets have to say on websites.

That’s enough reason for me to not want to let my French Bulldog eat any form of potato, no matter how it’s been prepared or cooked.

But I have included references in this guide to how small amounts of cooked potato will be ok – I am just not convinced of the health benefits.

Here is a list of potato-based foods we won’t let our own Frenchie, Claude, eat:

A French Bulldog is designed to get most of his nutrition from animal proteins. They wouldn’t eat potatoes in the wild, so moderation is key if you do want to do this.

Yes, I know that there are plenty of dog foods on the market that come with potato in them, but for me, it’s one to avoid.

I’ve seen enough evidence now to make me think that I don’t want to feed our French Bulldog anything with potato in it.

Whilst you might still think it’s ok in small amounts, I prefer to play things on the safe side.

After all, French Bulldogs are a breed that are prone to health problems anyway, so why would you do anything that could increase their chance of illness?

You Might Also Like: I have also put together a new article about Frenchie’s eating carrots. It includes all you need to know about the health benefits and potential risks in adding this to your dog’s diet.