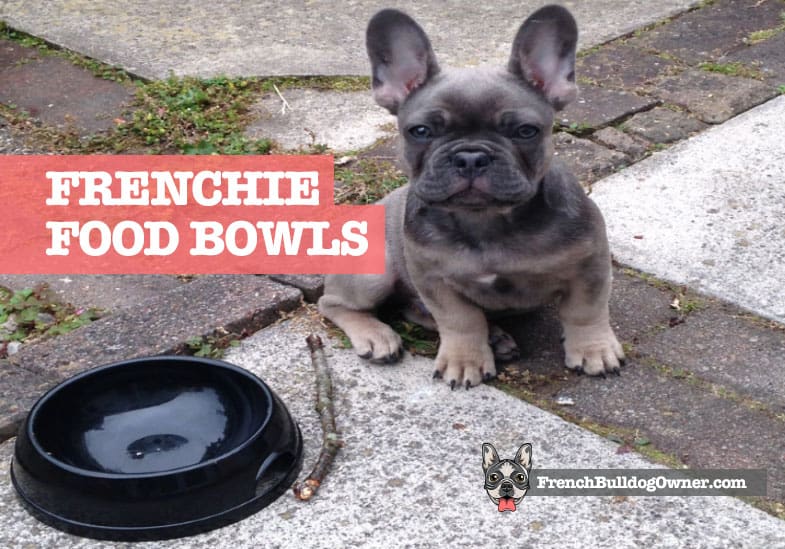 Anybody who owns a Frenchie will know how motivated they are by their stomachs. If there’s food to be had, a French Bulldog will wolf it down in super quick time. However, this can cause them issues such as flatulence, bloating, and choking… some of which can be reduced just by using a specialist French Bulldog food bowl.

As a brachycephalic breed with flat faces and shortened necks, Frenchies can struggle to eat and drink from standard dog bowls. If they end up eating too fast, they are prone to bloating and possibly even choking.

This can be exacerbated with the wrong type of French Bulldog food and water bowl that lets your Frenchie chew, swallow, and drink too fast.

If you scroll down you will see my choices on the best food bowl for a French Bulldog, but first let me explain why I recommend what I do.

What food bowls to avoid with your Frenchie

I am not a fan of plastic food bowls for a number of reasons. Firstly, they scratch easily, and bacteria can form in the scratches on the plastic and be very hard to remove, even with cleaning.

This presents a potential health hazard to your Frenchie, as does the possibility that your dog could also have an allergic reaction to plastic. Plus, Frenchies are huge chewers and there’s the additional risk of them chewing the plastic bowl and hurting themselves.

There’s also the consideration that plastic French Bulldog bowls might leak BPA (Bisphenol A) into the food and water. This dangerous chemical in plastic dog food bowls is a little controversial though, as the FDA say there’s no risk, whilst some research has shown it could be.

I prefer to be on the safe side, so won’t choose plastic food bowls for our Frenchie.

What is the best material for a French Bulldog food bowl?

The best French Bulldog food bowl will be made from stainless steel. I like bowls that are scratch resistant, simple to clean, and harder to tip over if trodden on by your Frenchie.

Dishwasher safe and sturdy, I like stainless steel food bowls with rubber underneath, so they stay put when your Frenchie is eating and drinking.

There’s nothing wrong with ceramic food and water bowls but can become easy chipped and cracked meaning they break or attract bacteria in the gaps.

What size bowl do I get for my French Bulldog?

The size of your French Bulldog’s food and water bowls doesn’t really matter. We have a large stainless-steel bowl for drinking water which we change every day, and a slighter small food bowl.

There is one consideration here though; if you have a large feeding bowl you might be tempted to put too much food in it, and over-feed your Frenchie. It’s easy enough to do, and there have been studies about how larger plates lead bigger portions and obesity with humans, so you can apply the same logic to dog bowls.

Handy Hint: The most important aspect is feeding your Frenchie the right amount of food. I’ve written a guide previously with feeding charts included.

How high should the food bowl be off the ground?

And lastly, many Frenchie owners say you should use elevated feeding bowls that are high off the ground to avoid bloat. This opinion appears to be changing in recent years, with this interesting statement found on the DailyPuppy.com website:

“In the past, raised food bowls were believed to minimize dogs’ chances of developing bloat, which is a sometimes fatal gastrointestinal condition. Studies have shown, however, that raised food bowls do just the opposite. These feeders can make your pet more vulnerable to bloat, says veterinarian Jon Rappaport and other experts. Because of the potential dangers associated with raised food bowls and issues such as bloat, it’s important to never use them for your pet unless your veterinarian specifically instructs you to do so.”

Now you have bit of insight into what makes the best French Bulldog bowl, here are just a couple of choices which ticks all the boxes.

This stainless-steel slow feeder is ideal for Frenchies. It’s designed with the obstructive hub in the middle of the food bowl. This stops them from eating their food too quickly, or in too large a gulp, therefore helping to prevent choking or bloating.

Instead, your Frenchie has to work a bit harder and slower for his food, so there’s no chance of him chewing it down in seconds and also getting indigestion. It also has a rubber base so won’t slide or tip over.

When we introduced this food bowl to our Frenchie, we noticed his vomiting reduced. Before he would probably be sick once a week because he was eating too fast. With this food bowl, it’s now a lot rarer.

An alternative French Bulldog food bowl is a slanted model. Admittedly it is slightly off the ground, but not high enough to cause any issues. The primary reason for the design is to alleviate neck pressure on your Frenchie and make eating not as messy!

It works by leaning at a 15-degree angle, so your Frenchie’s food goes to the bottom of the bowl. That means your Frenchie doesn’t have to chase his food around the bowl making it fly all over the floor… it also reduces the chance of them getting neck pain when bending flat to the bowl surface.

The manufacturer says that this unique design helps to reduce bloat and indigestion, and wont’ slip and slide over the floor. As with the previous bowl, it’s made from stainless-steel.

And finally, you will need a separate bowl for the water. With this one there’s not really much need to slow the drinking down, as this is a problem typically associated with just feeding.

I recommend a French Bulldog water bowl that is 2 to 3 times larger than the food bowl, and the water should be replaced daily with clean and fresh.

Frenchies should have their own feeding and water bowls, rather than just an afterthought like an old dish or cereal bowl you no longer need.

Whilst it might be tempting to buy a food bowl for your Frenchie that looks fun and funky, with bowls, functionality always has to beat out form.

Get the right size, something that slows down their eating, won’t slide about, and will last for a few years – like stainless steel!

Whilst you’re here please do take the time to browse around French Bulldog Owner. I’ve published hundreds of helpful guides over the last few years. Here’s a selection of ones I think you might like to read next: